Alfred Hitchcock’s Notorious: How to Create Drama from Internal Conflict and Ironic Suspense 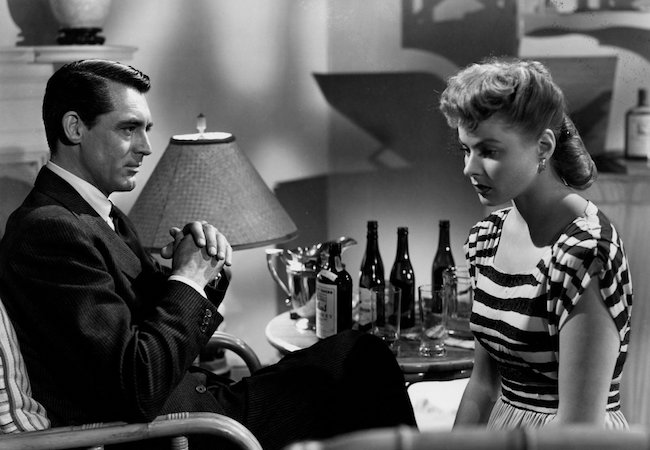 To stop a Nazi plot, an American agent pimps the woman he loves to a dangerous Nazi. This is the premise of the drama and thriller Notorious, one of director Alfred Hitchcock’s best films. Written by celebrated screenwriter Ben Hecht, Notorious was released in 1946 and stars Cary Grant as U.S. agent Devlin, Ingrid Bergman as the daughter of a Nazi Alicia Huberman, and Claude Rains as Nazi Alex Sebastian.

What lifts Notorious above the level of good thriller is the lead characters’ internal conflicts and the story’s ironic suspense. To set these up, Hitchcock masterfully establishes the characters’ premises and problems to create a situation that he will escalate throughout the film.

The story opens in Miami, where Alicia’s father, a Nazi spy, is sentenced to twenty years in jail. Alicia, a good-time girl and alcoholic, marks the occasion with a party, where she meets and is attracted to the handsome Devlin. Their mutual attraction stalls when Devlin reveals he is an American agent. After Alicia sobers up, the mission-dedicated Devlin asks her to help him bust a gang of Nazis in Brazil, but angry about his earlier deceit Alicia refuses. After Devlin reveals evidence of Alicia’s patriotism, she agrees to help stop the Nazis.

Hitchcock coaching Ingrid Bergman on the proper poisoning pose on the set of Notorious. Image courtesy of MGM

In romantic Brazil, Alicia and Devlin become lovers, but because Devlin can’t forget her tramp past he won’t declare his love to her. Alicia swears she has forsaken her past ways, but Devlin still refuses to believe or trust her. Just before their first romantic dinner, Devlin is called into a meeting with his boss to learn the exact nature of Alicia’s assignment. In shock, Devlin returns to tell Alicia that she must become a tramp again, by becoming the lover of Alex Sebastian, a ruthless but lonely Nazi helping to develop a secret Nazi project. Devlin wants Alicia to prove her tramp days are over by refusing the assignment—and Alicia wants Devlin to prove he trusts that she has changed by declaring his love and telling her not to take the job. But neither is open with the other about their true desires, so Alicia takes the assignment. Now Devlin must dangle Alicia as bait to Sebastian. While Devlin watches, the Nazi chomps on it.

This situation—a man pimping his lover or a woman being pimped by her lover to an evil and dangerous man—is intensely dramatic for several reasons, and its suspense works on two levels. The first level results from Hitchcock’s twist on the traditional love triangle. Gone is the usual triangle of, say, a woman in love with two men and the tension and suspense coming from her having to choose, with increasing difficulty, between the two lovers. In Notorious, Alicia hates Alex (though he loves her) and is only pretending to love him, but she really does love Devlin. The suspense of this “love” triangle derives from the danger of Alicia and Devlin deceiving Alex about their own relationship, from Alicia deceiving Alex that she loves him, and from Alicia deceiving Alex as a spy. If Alicia’s deceptions are revealed, she will be killed. Complicating this danger and further heightening the suspense are Alex’s ruthless Nazis partners and his jealous mother, who mistrusts Alicia. The threat from the Nazis is set up early when we see them conspire to murder another Nazi who had innocently revealed a clue to their plot.

Devlin and Alex’s internal conflicts add a second more psychological level of suspense and drama to the story. Both Alicia and Devlin are torn between two high value premises: patriotism (Alicia) or the mission (Devlin) and their romantic need. We watch in suspense as Devlin and Alicia are forced to make choices between their values, and we fear the consequences of these choices. The story forces us to ask character-based suspense questions such as: Will Devlin reveal his love for Alicia? Will Devlin and Alicia survive her sleeping with another man, a Nazi? Will the romance between Devlin and Alicia hurt their mission?

Devlin and Alicia’s internal conflicts are integrated with the danger plot. Each choice and action Devlin and Alicia take to attain their mission goal, for instance, escalates the conflicts between them and their internal conflicts. It is Devlin’s and Alicia’s premises and values that integrate these two levels of the plot. Because Devlin, for example, can’t express his love to a former tramp, his silence presses Alicia more and more towards her assignment re Alex, from meeting him, to sleeping with him, to finally marrying him. As Alicia makes these ever-harder choices, Devlin’s mistrust becomes more entrenched, pressing him to further support her assignment and reject the idea of her as his lover.

Alfred Hitchcock is often hailed as the master of suspense. He explained to director Peter Bogdanovich his principle of suspense:

“We come to our old analogy of the bomb. You and I sit here talking. We’re having a very innocuous conversation about nothing. Boring. Doesn’t mean a thing. Suddenly, boom! A bomb goes off and the audience is shocked—for 15 seconds. Now you change it. Play the same scene, show that a bomb has been placed there, establish that it’s going to go off at 1 P.M.—it’s now a quarter of one, ten of one—show a clock on the wall, back to the same scene. Now our conversation becomes very vital, by its sheer nonsense. Look under the table! You fool! Now the audience is working for 10 minutes, instead of being surprised for 15 seconds.”

Hitchcock’s formula for suspense is a high-adrenaline blend of ticking-clock danger and dramatic irony, both of which are amply seen in Notorious.

First, the ticking clock. One of Notorious‘ best suspense sequences concerns the cellar in Alex’s mansion, where Devlin believes evidence for the Nazi project is hidden. While a party carries on upstairs, Devlin and Alicia search the cellar, entering with a key she has stolen from Alex. Devlin, Alicia, Alex, and the audience know that Alex will soon need to resupply the party with champagne from the cellar. Will Alicia and Devlin find the clue before Alex arrives? Or will they be discovered in the cellar and be killed? The sequence lasts for thirteen riveting minutes and climaxes with a twist that plays on the three characters’ internal conflicts.

In the last act, Hitchcock uses dramatic irony to heighten the suspense. The audience knows that Alex is poisoning Alicia while she (for most of the act) does not. During the act, Hitchcock seamlessly integrates the melodramatic danger of the poisoning with the drama of the characters’ inner conflicts. For example, after Devlin finally understands that Alicia is in danger, he becomes more appreciative of his love for her, so that in the climax he finally expresses his love to her, which helps save her life.

Notorious also exhibits Hitchcock’s stylized approach to drama and suspense. Alicia the “tramp” is not played sordidly, and we do learn that she had a good reason to act this way. All the characters, including the villains, are elegant, witty, or charming. There are no dumb brutes, baseball bat-wielding maniacs, or curse spewing heavies in a Hitchcock film.

This director makes his villains three dimensional and logical by giving them needs and conflicts we all recognize, such as Sebastian being lonely and needing love—and the help of his mother. Alex’s domineering and jealous mother is a realistic but stylized characterization. Played brilliantly by Madame Konstantin, she does not rave, eat babies, or drink blood, but is bloodcurdlingly cold and methodical in her neuroses and malice.

Hitchcock makes his heroes attractive and real. We enjoy Devlin and Alicia’s good looks, wit, and elegance. We can identify with or understand Devlin’s insecurities and Alicia’s mistakes.

Such characterizations make Notorious‘ characters more vivid, more likable, or more dangerous, which increases the drama and suspense. Notorious well reflects the old Hollywood dictum of “less is more.” The “less” of Hitchcock is the implicitly written and elegantly directed and acted scenes. Hitchcock at his best is a great treat.

Notorious‘ many tasty flavors flow from its dramatic conceit of two good people torn between their own premises while caught in a life-threatening situation. This makes Notorious a rare story: a great suspense thriller and a heartfelt drama. MM