An Internet Girlfriend, a Grandmother and a Transgender President: NFMLA Celebrates LGBTQ+ Films 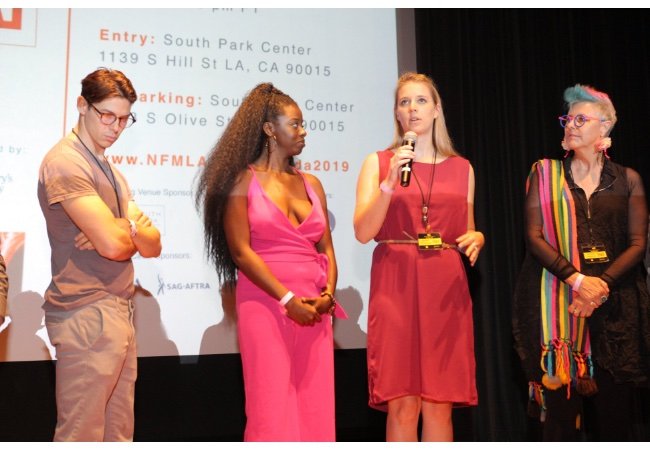 An insurance adjuster eager to meet his Internet girlfriend, a transgender actress who sets out to become the president and a queer Filipino-American meditating through his anxiety about greeting his grandmother are some of the main characters in a recent New Filmmakers Los Angeles festival that which highlighted LGBTQ+ Cinema.

Powered by Seed&Spark, NFMLA’s June 28, 2020 festival featured a pair of shorts programs, one in partnership with Outfest. The block offered a mix of thought-provoking drama, complex comedy, purposeful animation, uplifting music and vivid surrealism as it told stories about friendship, survival, and the quest to find (and make) meaning.

The afternoon continued with a curated collection of narratives and documentaries that brought together perspectives exploring gender expression and identity. The night’s final program celebrated the talent of LGBTQ+ creators with a selection of short films, music videos and episodes.

NFMLA showcases films by filmmakers of all backgrounds throughout the year in addition to its special InFocus programming which celebrates diversity, inclusion and region. All filmmakers are welcome and encouraged to submit their projects which will be considered for all upcoming NFMLA Festivals, regardless of the InFocus programming.

About Ian: Now a full-time filmmaker, he is focusing on directing his own projects and working with young talent to create a better world.

About Sydney: A graduate from DePaul University’s MFA program in Cinema Directing, Sydney has directed multiple shorts, music videos, and documentaries of which have been selected, screened, and awarded at multiple film festivals around the world.

About Mélisa: Mélisa is a DePaul University Theatre School graduate who delivers impassioned performances in both comedy and drama on camera and on stage, while multitasking as a producer and writer.

About “Being Here”: Charlie, a young woman in her late 20s, is forced to contend with the comfortability of rehab and the beckoning call for life to start again when her close friend experiences personal tragedy.

About Beth: Besides endeavoring in film writing, Beth concentrates on her acting career and has contributed to more than twenty-five film, TV, and theatre productions.

About Patricia: A stranger named Patricia disrupts the peaceful dynamic between roommates Sarah and Beth by living in their backyard.

Watch the NFMLA interview with Beth Triffon, writer of “Patricia”:

About Nicholas: Entering his senior year at RIT’s School of Film and Animation after his first short film “Shears n’ Gears,” Nicholas wants to refocus his interests around 3D animation — specifically on modeling and texturing.

About Shears n’ Gears: A robot barber must find a new purpose when he realizes there are no more humans to give haircuts to.

About Deante’: Deante’ Gray, is a writer-director from Houston and a former NFL athlete who specializes in exploring the various human conditions that real life people face in his narrative storytelling.

About Loving Byron: Byron Williams is an African-American teenaged boy who has run away with his longtime girlfriend Rachel, and he must grapple with the realities of providing for the love of his life when an old friend turns up.

About Emory: Prior to starting their MFA program at the University of California, Los Angeles, Emory Chao Johnson worked with the Asian American Documentary Network, the UCLA Center for EthnoCommunications, and Visual Communications.

About Bind: A glimpse into the trans Asian diaspora. Jules gets a surprise visit from their mother… and their chest binder.

About Michelle: Michelle Peerali is a Writer/Director/Producer who currently is in pre-production on a narrative coming-of-age short film, “How Not To Be A Junkie”.

About Andrea: Andrea is a GLAAD Media Award recipient and long-time TV executive producer and director.

About Candis: Similar to her eponymous counterpart, Candis is a charismatic and driven individual who uses her platform, on screen and off, to advocate and display her activism.

About Candis For President: Transgender actress, Candis, sets out to become the President of the United States — inspired partly by the current (reality TV) president — with the help of her sarcastic television producer sidekick, Andrea.

About Tee: Born in Seoul and based in Los Angeles, Tee is a trans filmmaker and writer who tells marginalized stories through genre filmmaking conventions.

About “The Pupal Stage”: A newly-out trans woman is thrusted into a coming-out party that starts as a cheerful celebration of life but slowly transforms into something else when she starts feeling ill.

Watch the NFMLA interview with Tee Park, director of “The Pupal Stage”:

About Brian: Brian Redondo is a Brooklyn-based documentary filmmaker committed to telling stories about traditionally marginalized communities, often exploring issues of race, immigration, and how these topics intersect with culture.

Watch the NFMLA interview with Brian Redondo, director of “Jes Fan in Flux”:

About Azzan: Azzan Quick is a filmmaker and photographer based out of Durham, North Carolina, who tells stories mainly surrounding the LGBTQIA+ community as well as the stories of people of color.

About “Translucent”: A self portrait of a filmmaker navigating the nuances of their gender identity while those around them undergo cognitive dissonance in face of the filmmaker’s change.

Watch the NFMLA interview with Azzan Quick, director of “Translucent”:

“Take One Thing Off ” directed by Scout Durwood

About Scout: Scout is an accomplished cabaret singer and nationally touring comedian that kick-started her music career with debut studio album and twenty-two episode series, “Take One Thing Off.”

About “Take One Thing Off”: Scout grapples with the existential dilemma of trying to adapt her career as a live performer into success in the digital space.

Watch the NFMLA interview with Scout Durwood, director of “Take One Thing Off”:

About Dani: Dani is a film and theater director based in Chicago.

About Mary Tilden: Mary is an actor, comedian, writer and producer based in Chicago.

About “Cool For Five Seconds”: Colleen invites Eleanor to meet her in a diner late at night. They haven’t spoken in years — and Colleen has something to say. When Colleen reunites with her estranged sister, things don’t go exactly as she planned.

About Brandon: Brandon English pulls inspiration from his Filipino roots and his Queer identity to explore his artistry through movement, spirituality and deep script analysis.

About Bakla: Brandon, a queer Filipino-American grandson, meditates through his anxiety.

Watch the NFMLA interview with Brandon English, director of “Bakla”:

About Jesse Randall: Under the guidance of Tony-nominated actress Lorraine Serbian and acclaimed playwright Julie McKee, Jesse Randall emerged as a writer, director and producer who primarily focuses on LGBTQA-themed projects that illustrate the wonderful complexity of queer life.

About The Safety Plan (Chapter 3): A socially inept, existential New Yorker abandons his life for “perfect” Los Angeles in search of a chosen family in the LGBTQA community, but he quickly discovers that starting over isn’t the fantasy he thought it would be.

Watch the NFMLA interview with Jesse Randall, director of “The Safety Plan (Chapter 3)”:

Own Your IP: How Codie Elaine and Tommy Oliver Made Black Love, and Kept 100 Percent Ownership
Preparing My Dinner with André: Exclusive Excerpt from This Is Not My Memoir by André Gregory