Best Places to Live and Work as a Moviemaker, 2021 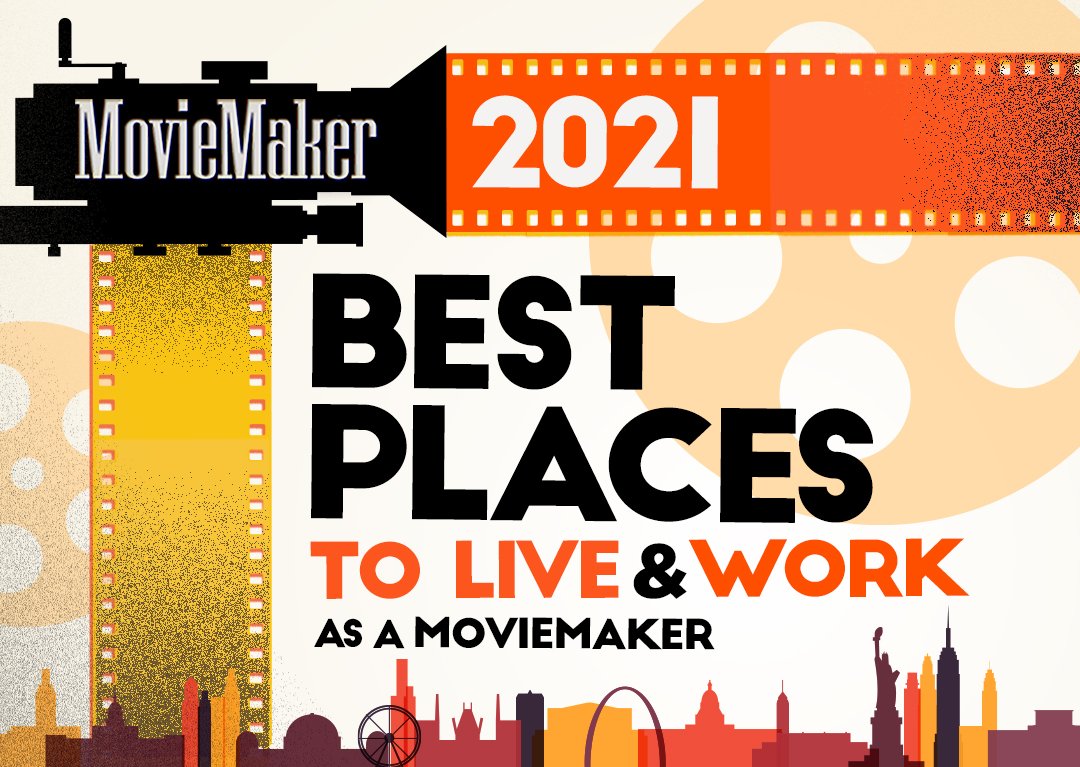 Some of the MovieMaker staff have been living outside Boston throughout the pandemic, and can join Mark Wahlberg, Ben Affleck and Matt Damon in endorsing it often and unreservedly. Boston is as metropolitan as other big cities, but with an abundance of greenery and outdoor space, plus quaint coastal towns and unspoiled beaches nearby. From The Thomas Crown Affair half a century ago to modern Oscar contenders like The Departed and The Social Network, it looks beautiful on camera.

Massachusetts has taken a careful, sensible approach to containing COVID-19, and long winters mean Bostonians might have a little edge on the rest of the country in terms of staying indoors and getting things done, without complaint, for long stretches of time. A wealth of small towns nearby can stand in for any kind of community you need, from blue collar to blue blood.

Also, film culture thrives here, thanks not just to magnificent arthouse venues like the Brattle Theatre in Cambridge, Coolidge Corner Theatre in Brookline and the Somerville Theatre in Somerville, but an unassailable documentary tradition anchored by PBS’s Boston-based series Frontline. Recent films shot in the region include Don’t Look Up with Jennifer Lawrence and Mother/Android with Chloë Grace Moretz.

The very film-friendly Bay State includes a 25% production credit, 25% payroll credit, and a sales-tax exemption. And F. Scott Fitzgerald called New England “the Land of Schools” for a reason: excellent ones for aspiring moviemakers include Emerson College, Boston University, Northeastern University, and many more. 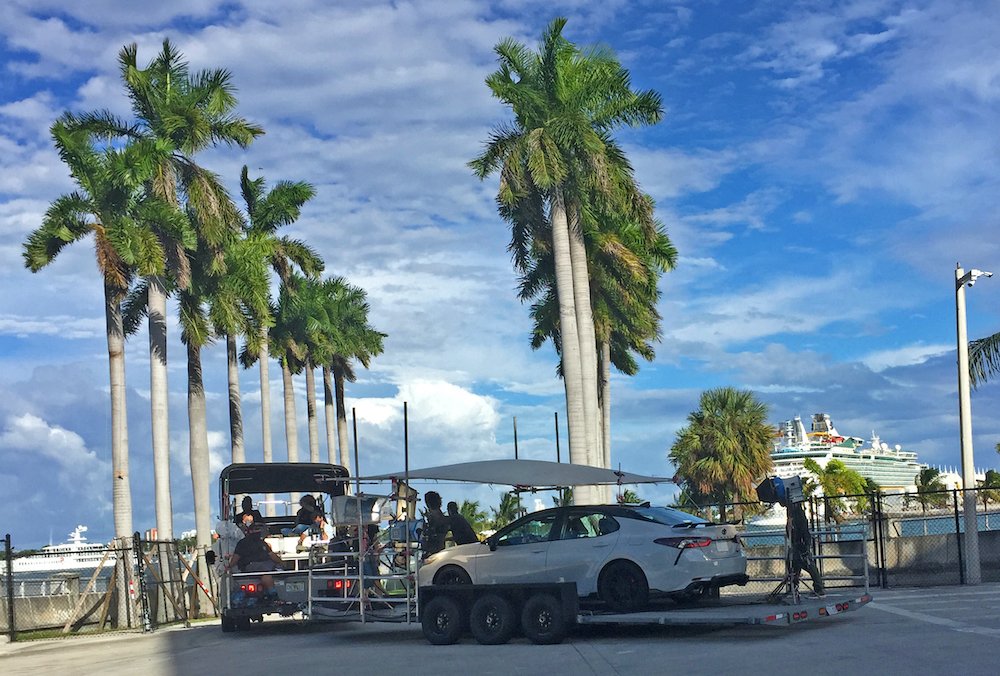 Miami is the home of 2020’s top-grossing film, Bad Boys for Life. Okay, 2020 was not a normal year, but Miami’s reputation as a vibrant film center spans decades. Endlessly photogenic, with gorgeous weather almost always, Florida is just a few rich tax incentives away from posing a major challenge to neighboring Georgia.

The state currently has a two-tiered grant system with a maximum of $100,000 for Miami- Dade County projects of $1 million or more and $50,000 for projects of $500,000 to $1 million. And FilMiami smooths the permitting process with a one-stop system across several jurisdictions.

“Miami has been a playground for indie filmmakers for a few simple reasons. In a city less saturated with productions, people tend to be generous with their venues, rentals, excitement, and tolerance for filmmakers,’” says Miami-born artist-moviemaker Jillian Mayer.

She adds, with tongue- in-cheek: “There is no tax incentive because our state is run by Bond villains and we are sinking in the sea. Because we are situated at Ground Zero for the effects of global warming with sea level rise standing to diminish our edges, fatalism tends to make it into much of the work, which I find inspiring. There is an urgency when one is on Mother Nature’s clock.”

Miami-Dade County has a wide array of locations, but also a kind of light — especially in 2017 Best Picture winner Moonlight — that you can’t capture anywhere else in America. 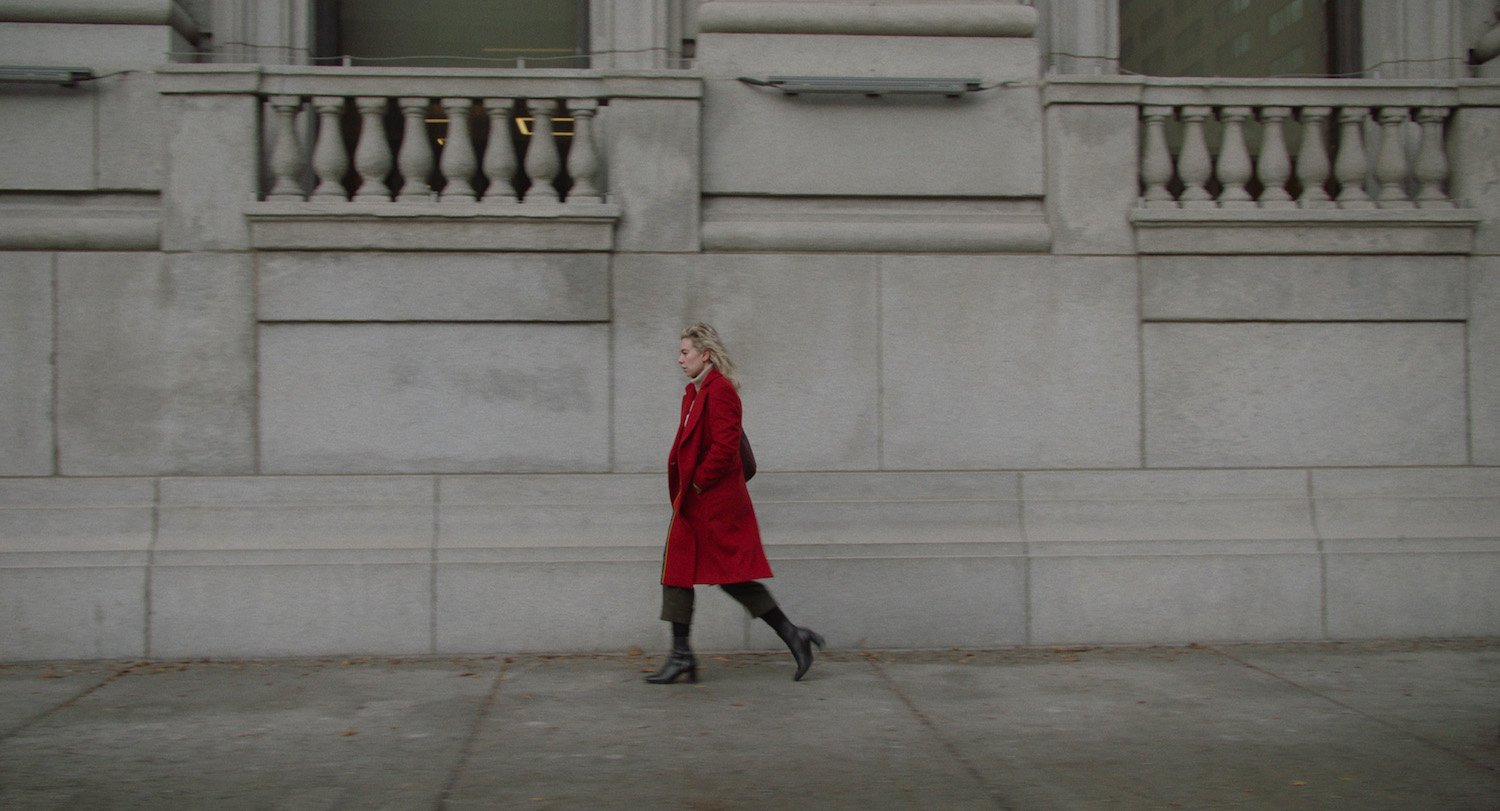 Pieces of a Woman. Photo by Benjamin Loeb

Chanelle Routhier, film and TV commissioner for Quebec, describes Montreal as “very friendly, creative, appreciative of culture and art, and very talented! With the National Film Board created in 1939, we have been able to create a cinematographic culture which has been passed on from generations to generations.”

Moviemakers in Montreal will find excellent crews, equipment rental facilities, sound stages, and post- production facilities — as well as appreciative audiences. The Fantasia International Film Festival is widely regarded as one of the greatest genre festivals in the world, and did a wonderful job this past summer of virtually capturing the mystery and excitement of an in-person film festival, with daring and audacious curation.

Tax credits are stable and generous, reaching up to 43 percent. The Quebec Film and Television Council will help you find anything you might need — in French or English. Quebec’s thriving industry also includes lots of animation, dubbing and VFX companies. 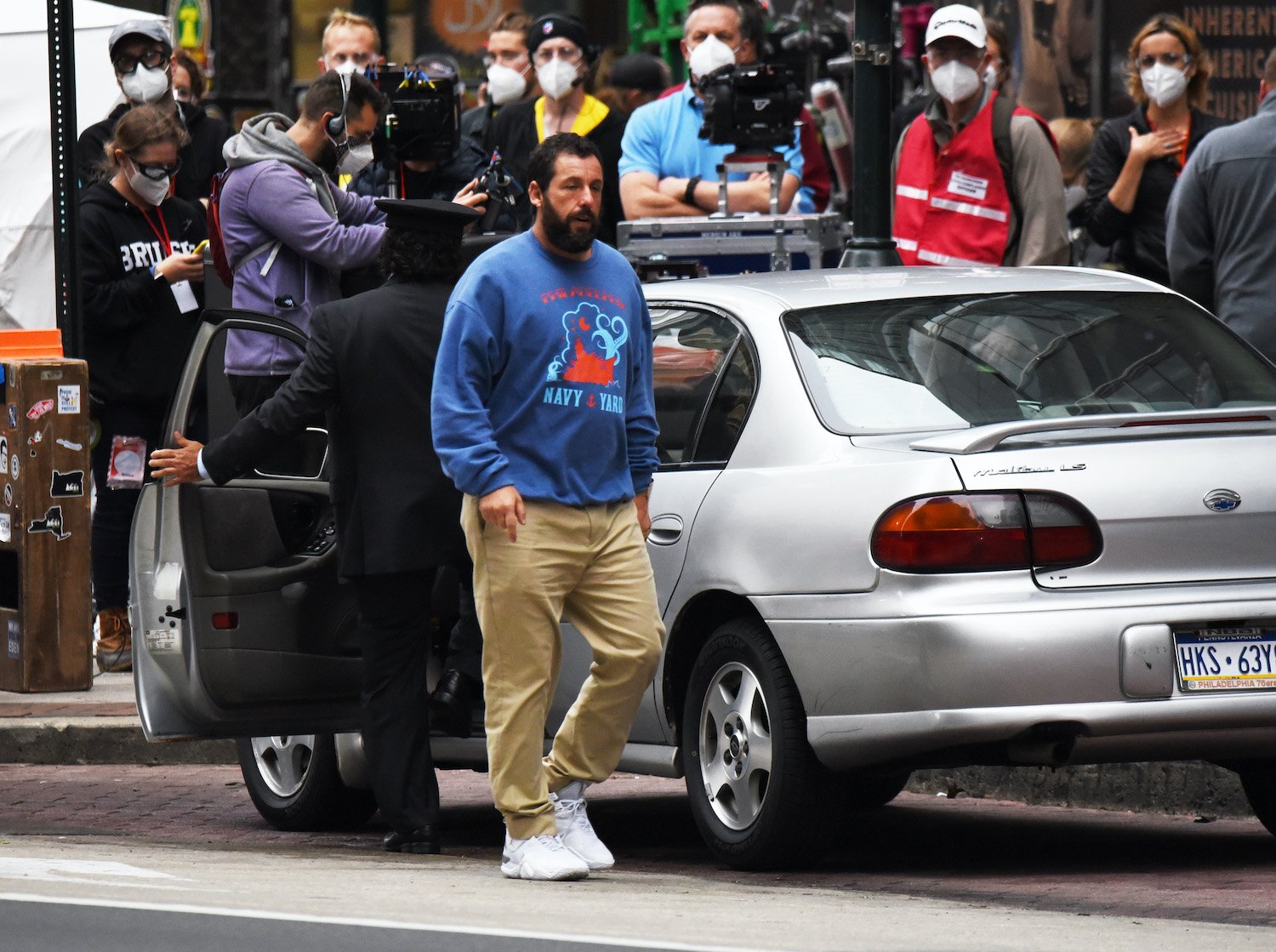 The murals on seemingly every surface testify to Philadelphia’s embrace of creativity. The city is sometimes praised as New York City’s sixth borough. But if we’re being honest, Philadelphia is in some ways superior to New York City, especially in terms of the potential for a person who doesn’t happen to be very rich to be able to buy a very comfortable house, either in Philadelphia or in one of its many friendly suburbs. And you don’t have to cut ties with NYC: an Amtrak ride will get you into Manhattan in 90 minutes.

Another plus is a state tax credit of up to 30%. Also, Philly has at least 16 film festivals, including the dynamic BlackStar Film Festival, that testify to the region’s embrace of movies. More than half a dozen local independent theaters have persevered through the pandemic with online or socially distanced in-person screenings. And you’ll have no trouble at all finding equipment rentals or production facilities. The list of projects that shoot here is long, and include Adam Sandler’s latest project for Netflix, and of course, the second season of favorite son M. Night Shyamalan’s Servant.

Philly is eminently livable — it has four seasons (none of them too extreme), great public transportation, and delicious food from everywhere in the world (including nearby Amish Country). Finally, locals take that City of Brotherly Love credo to heart: Philadelphians are just nice. 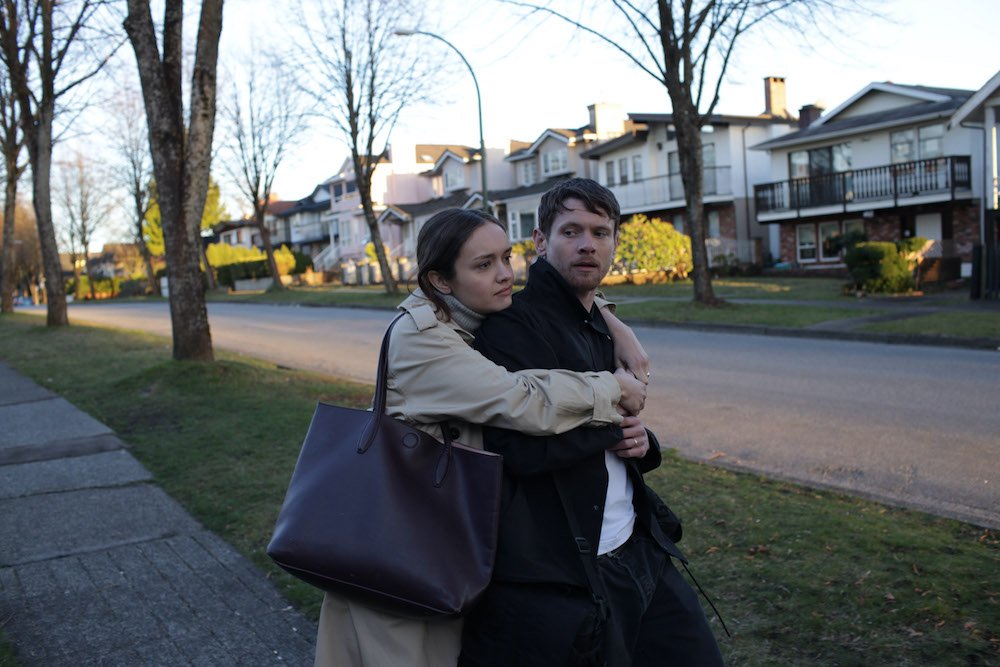 Ryan Reynolds came home last year to shoot the star-studded The Adam Project, which features Jennifer Garner, Mark Ruffalo, and Zoe Saldana. But Vancouverites are more than accustomed to seeing famous faces around town at this point: generous, sustainable tax incentives, and temperate Canadian weather have lured many an A-lister up the Pacific Coast.

Sandra Bullock shot an untitled Netflix film in the Chinatown district of Vancouver in 2020, and you can ponder what it might be about as you walk along nine beaches stretching out over 18 kilometers — that’s about 11 miles in American.

If you’re looking to go back to school, British Columbia has seventeen educational institutions that offer digital media and motion picture production programs, including the University of British Columbia, Simon Fraser University, Capilano U, and Vancouver Film School.

Tax credits in British Columbia can be tricky, but it’s worth the money you’ll spend on a good accountant to figure them out. A production can receive a 35% basic tax credit along with several additional credits for particular types of projects and locations. For example, a digitally animated production done in certain locations could receive a total credit of a jaw-dropping 69.5%. 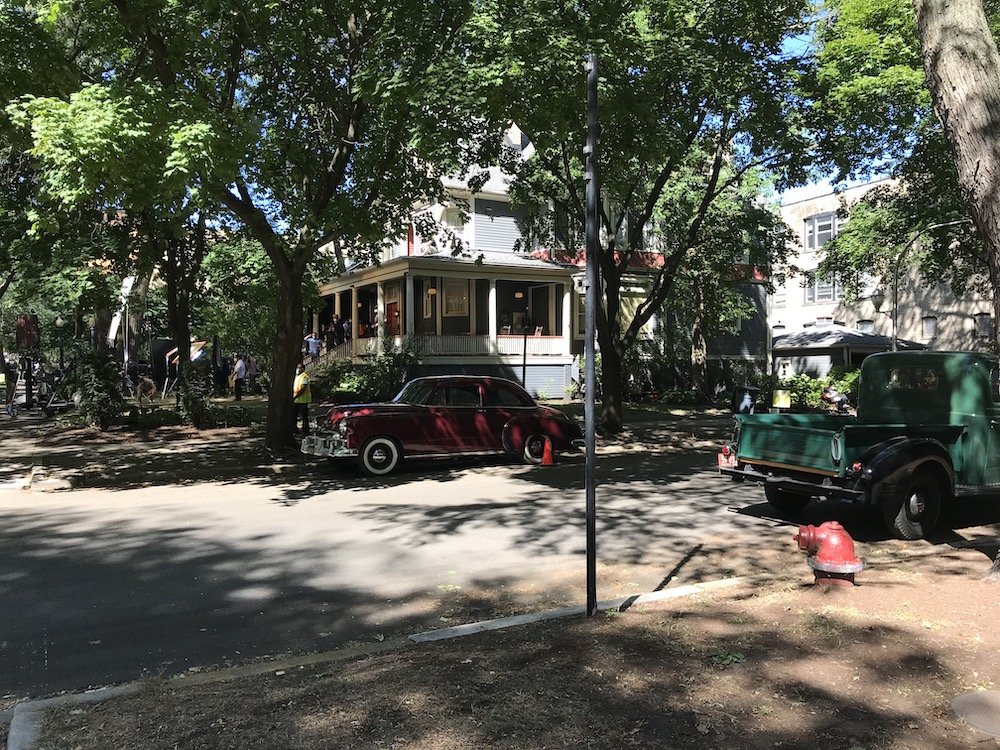 Chicago was one of the main locations for the most-talked film of 2020. We’re talking about Contagion, which shot there a decade ago. But Chicago has become an even more attractive locale in the decade since.

2019 was a record-breaking year for film production in Illinois, and 2020 was poised to surpass that success. Of course, we all know why that didn’t ultimately happen, but Chicago did host several television programs, and last year seems unlikely to end Chicago’s rapid ascent as a major moviemaking hub.

Columbia College of Chicago is one of MovieMaker’s Best Film Schools in the U.S. and Canada in 2020, and Northwestern, which also made our list, houses a top- notch documentary program in nearby Evanston.

The Chicago Film Society — which normally screens 35mm and 16mm prints — got creative in its 2020 fundraising efforts, launching a DIY zine which helps raise money for the nonprofit. Issue #1 hit in mid- September, offering “a treatise on making films at home, horoscopes, shipping blotter, and MORE!”

Chicago also played Kansas City in Season Four of Fargo, lining the streets with beautiful period sedans. The FX production had to shut down midway due to COVID-19 but was able to return to wrap production in time for us to watch Chris Rock as a 1950s gangster.

And Chicago is strikingly less expensive than New York City and Los Angeles, especially in terms of real estate. 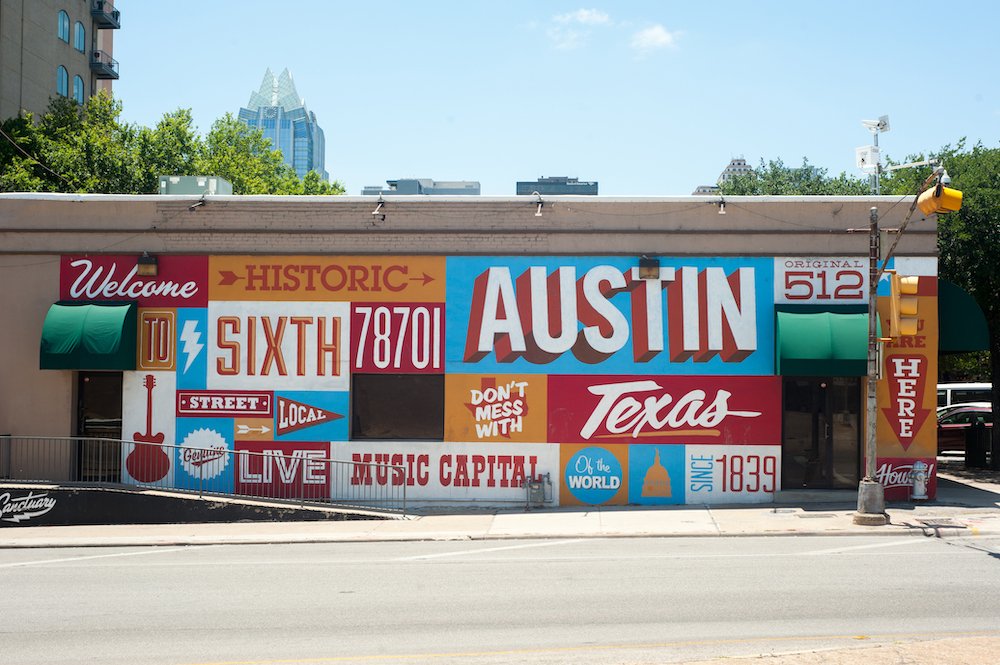 For many in the film world, the cancellation of Austin’s SXSW was the moment of realization that COVID-19 was going to cause massive change. Since then, many who left Los Angeles and New York have chosen Austin as their new base. Austin was ready for the influx. The homebase of Richard Linklater and Robert Rodriguez has spent decades building up a reputation as a keeping-it-weird film mecca.

“There is plenty of community spirit to be found among filmmakers in the bigger cities — but then, all your filmmaker pals in New York and L.A. are devoting their full energies to trying to survive their own daily trials there,” says Austin-based moviemaker Andrew Bujalski, whose films include Support the Girls and Results. “Austin is the only place I’ve known where, when a project gets going, everyone seems to drop what they’re doing to come help.”

A list of recent projects makes clear how bustling the production community is: Rodriguez’s We Can Be Heroes with The Mandalorian star Pedro Pascal, Linklater’s animated Apollo 10 1⁄2 with Jack Black, and TV shows including FX’s A Teacher and AMC’s Fear the Walking Dead.

Locations of all kinds can be found around the capital of the Lone Star State, from urban scenes to small towns, ranchland, lakes and just about anything else you can imagine. Permitting is easy, and local film sets take the pandemic seriously.

Texas has never been the most generous state in terms of tax incentives, but the Texas Film Commission makes up for that with the Texas Moving Image Industry Incentive Program that provides cash grants that offer up to 22.5 percent back, depending on production spend. We don’t need to tell you the food is stellar, from queso to barbeque, and someday soon the legendary music scene will come roaring back to life, too.

A 30% tax credit, great weather, excellent crews and a slew of blockbusters have made Atlanta a force for years. But the home of The Walking Dead, Watchmen, and much of the Marvel and DC cinematic universes is also an innovator when it comes to the industry’s fight against COVID-19. Tyler Perry was one of the first high-profile moviemakers to prove that filming could safely resume when he quarantined cast and crew this past summer, and even used private flights to ensure safe travel to his own Tyler Perry Studios. The Georgia Film Office also issues a short, jargon-free guide to shooting safely.

As the pandemic has changed every aspect of filmmaking, Atlanta has strived to adjust as quickly — and safely — as possible.

“The way that crews are having to morph and change because of the pandemic, they’re more spaced out—you actually need more equipment, so that way you have less touch points between people and shared things,” says Film Impact Georgia executive director Melissa Simpson.

Atlanta has continued to thrive as a film center during COVID-19 — and even grow. In fact, Pinewood Atlanta Studios rebranded in 2020 as Trilith, a location that includes a small town with its own homes, restaurants, parks, and schools — as well as production facilities within walking distance.

Atlanta isn’t just home to big productions, but indie ones, too — and Film Impact Georgia responded to the pandemic by creating an educational program for moviemakers, in addition to a twice-a-year grant program for making shorts.

Derek DelGaudio: In and Of Itself Emotion Is No Illusion
L.A.’s Kobe Bryant Murals Resonate in Sincerely, Los Angeles Doc Trailer