Cannes Do: A Filmmaker’s Guide To Cannes, Day 5

Independent filmmaker Patricia Chica is covering the 2014 Cannes Film Festival for us. You can read part one of Patricia Chica’s personal Cannes diary right here, part two here, part three here, and part four here. Today, on day five, Patricia takes a much-needed “Day Off” and tells us where a filmmaker can get some food and try to stay sane.

About 13 years ago, I directed a docu-drama show for Oxygen, and for one of the episodes, I had to follow the sergeant of the Precinct 42, of the NYPD Police. While we were patrolling the skid rows of the Bronx, Sergeant Stephan said to me: “You know, Patricia, you have to eat whenever there is an opportunity to eat because you never know when the next meal will come.” This expression stuck in my mind and I always apply this principle to seize an opportunity when it comes, especially when traveling to big and busy film festivals.

Festival de Cannes can get overwhelming because I spend my days walking around the site doing meetings, interviews with the media, networking, chasing tickets for a red carpet premiere, attending conferences and cocktail parties, etc. etc. Days go by fast and you come back to the apartment quite exhausted. With a few hours of sleep per day, and limited time to eat in between activities, there are very rare moments to have on your own to relax. Ouff! I’m only half way through the trip and I’m already starting to feel the exhaustion. Need to recharge my batteries!

Today, the sun is shining and I happen to have no meetings, conferences or interviews planned for the next four hours. I need to step away from the frenzy of the festival in order to come back to the site stronger. So I put my running shoes on and go for a one-hour jog on the Croisette, followed by an one-hour meditation/yoga at the beach. It is exactly what my body and mind need right now in order to center myself and find the energies to carry on.

Cannes is such a beautiful city and I recommend everyone to venture beyond the tourist areas and discover the true essence of a French Riviera town. For filmmakers who might be traveling on a budget, I recommend that they stay in Pointe Croisette, like my colleague Richard Cardinal and myself have been doing for two years now. It’s not too far from the festival’s headquarters (the Palais des Festivals is approximately a 25 minute walk) but the walk is very pleasant along the Croisette. Accommodations here are considerably cheaper than in the city center, plus, it’s away from the buzz and chaos of the tourists. I like the fact that my apartment is located only a block away from the beach and I can also hear the birds sing in the morning and can do my grocery shopping at a local boulangerie, fromagerie and traiteur! Nice little neighborhood.

Talking about food, I recommend several places for decent meals that will not break your indie filmmaker’s wallet. The Croisette’s Panini stands’ sandwiches are delicious here because they are made out of fresh local products! There is one Panini stand right outside of the Palais, on the International Village’s East exit. This is Richard’s favorite place to eat and the sandwich man already knows our taste. He still remembers THE Richard from last year! Well, who doesn’t? These are other affordable and delicious places where my gang and I eat while in Cannes:

Ma Nolan’s Irish Pub: Most of the staff is British and barely speaks French. From their terrace, you can see the stars stroll the red carpet, which makes it a cool spot to eat or drink at during the evening. 6 Rue Buttura

Al Shami Snack-Bar: This is by far the best food that I have eaten in Cannes. It’s owned by a young Lebanese chef who cooks all the dishes entirely from local fresh products. Even the harissa sauce is home made and the menu changes daily for a nice surprise every time that you eat there. This little family place is really worth the 12-minute walk and lets you get out of the wild Cannes Film Festival frenzy. 24 Rue Jean Haddad Simon

Chez Freddy: delicious traditional French cuisine from the South. Great ambiance and walking distance from the Palais des Festivals. Don’t ask for fancy American cocktails there though! They don’t know how to make them! 65/67 Rue Felix Faure 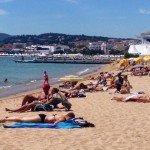 To know more about award-winning filmmaker Patricia Chica, follow her on social media in real time (or almost) at PatriciaChica.com, Facebook, and Twitter. Read part one of her Cannes adventures here, part two here,  part three here, and part four here, and stay tuned for more Cannes Do diaries from Patricia throughout the festival! MM

Cannes Do: A Filmmaker’s Guide To Cannes, Day 4
Festivals: The Founding and Future of Dances With Films