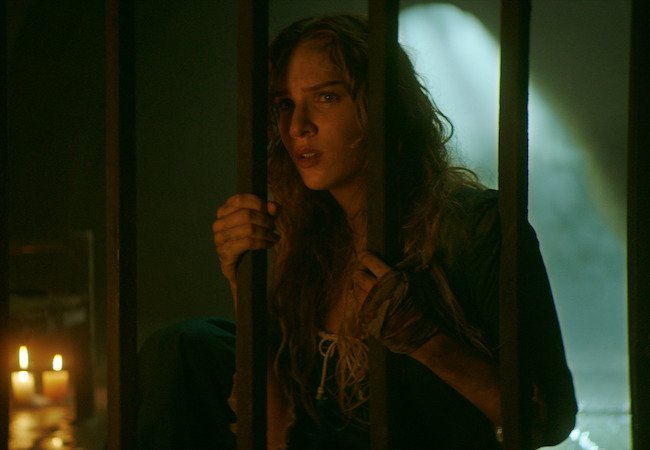 If you’ve read anything about Charlotte Kirk and Neil Marshall in the last two years, it’s hard not to read into the subject matter of their new film The Reckoning — the historical drama is about a witch hunt.

Kirk is empathetic and assured as a woman named Grace who loses her husband in a plague. She’s then sexually propositioned by her landlord, and when she rejects him, he accuses her of being a witch. From there, things get much worse.

Kirk and Marshall were co-writers on the film, which Marshall directed, and said they were perhaps “subconsciously” influenced by the events of their real lives.

She adds later in the podcast: “Hopefully people will be able to think for themselves and see what’s out there and say, yeah, I don’t quite believe this. There’s something in there that’s not quite true or believable. And I just want to watch films because I want to watch the films and hopefully see these people for who they are and see their work.”

You can listen on Apple or Spotify or above.

Marshall noted that they wrote the film in 2018, before a Hollywood Reporter story in 2019 disclosed Kirk’s long-ago involvement with a studio executive. Eventually that executive and another executive resigned. Kirk was sidelined from commenting by a court order. Marshall, to whom she is engaged, later issued a statement to Variety in which he denied an extortion attempt, called for more female studio heads, and demanded “the absolute abolishment of the terrible casting couch culture (which has morphed into sexual predation) that has long been an accepted part of the business.”

But Kirk and Marshall would really like to put those headlines behind them, as they explain on the podcast.

“And we didn’t know that,” Kirk added with a laugh.

They also talk about the horrible interrogation Grace suffers in the film — which involves actual 17th century torture techniques — and about how being diagnosed with Asperger’s syndrome and dyslexia as a child has affected Kirk’s acting career. She also talks about her very interesting experience playing Nicole Brown Simpson, and the odd dreams she had while playing the former wife of O.J. Simpson.

And they talk about the positives and negatives — almost all positives — of being a moviemaking couple.

The Reckoning, directed by Neil Marshall and starring Charlotte Kirk, is now available on Shudder. This story was originally published in February and has been updated with the new release information.

Main image, above: Charlotte Kirk as Grace in The Reckoning.