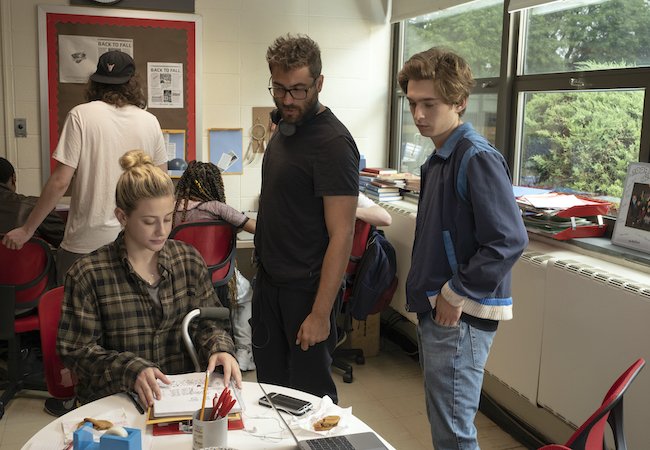 Chemical Hearts, the new film from Lili Reinhart and Richard Tanne, is a teenage love story for introverts.

In the film, based on a novel by Krystal Sutherland, a high school senior named Henry (played by Austin Abrams) is assigned to edit the school paper with a new student named Grace (Reinhart). Grace walks with a cane, dresses in typically male clothing, and doesn’t like to talk about her past. They gain each other’s trust slowly, in silences as much as through words.

There’s no snappy dialogue, big dance showdown at the prom, or any of the other hallmarks of bigger-than-life teen movies. One of the greatest challenges in making the film, says Reinhart, who executive produced the film, was “getting people to come on board with our concept of making a young adult film that wasn’t sunshine and rainbows coming out of everyone’s asses.”

“Teenagers are much more capable of watching films that are darker and have things to say, rather than something that’s made for people who can’t pay attention to things and need constant stimulation,” she adds.

Reinhart, best known for Riverdale and Hustlers, enlisted Tanne to write and direct. They worked out their vision for the Chemical Hearts by discussing films like Eternal Sunshine of the Spotless Mind and Blue Is the Warmest Color.

“What I really honed in on was the the the pain and the anguish that the two of them go through. Because I I feel like my adolescence was shaped in part by pain and tragedy, and crossing that threshold from adolescence into adulthood by coming to terms with mortality for the first time,” says Tanne.

You can listen to our full interview on Apple or Spotify or right here:

Reinhart and Abrams, both in their early 20s, worked closely with Tanne, in his 30s, to make sure their lines sounded authentic. And Reinhart often pushed for her character to say less.

Tanne agrees with the introvert assessment, which comes up about halfway through the interview on the podcast.

“I’m an introvert, but I can be extroverted when I have to be when I’m on a set, or when I’m doing an interview, and I think Lili is kind of an introvert too,” Tanne says.

“And Austin is completely an introvert,” Tanne adds. “So you have three introverts who are kind of at the tip of the pyramid.” 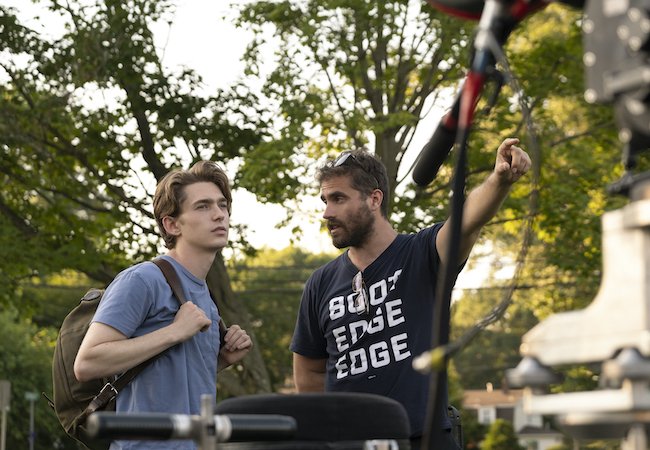 Austin Abrams as Henry and director Richard Tanne behind the scenes on the set of Chemical Hearts. Main image, above: Lily Reinhart as Grace Town, with Tanne and Abrams.

The result is a movie that values introspection and thoughtfulness, rejecting talky exposition and noisy, explosive reveals. Like Tanne’s previous film, Southside With You, about the Obamas’ first date, Chemical Hearts invites you to observe a growing relationship between two thoughtful, decent people, trying to find their places in the world, possibly together.

The film also acknowledges, in a way movies rarely do, how important chemistry is in the teenage brain, and how the brain’s vital growth in early life makes every moment feel heightened.

“The concept that heartbreak and love are both chemical reactions happening in your body… I find it very comforting,” Reinhart says.

Chemical Hearts, written and directed by Richard Tanne and starring and executive produced by Lili Reinhart, is now available on Amazon Prime.

Tesla: Ethan Hawke and Michael Almereyda Reunite for Another Story of a Man Out of Time
Movie News: Batfleck Returns; Criterion Criticism; Ethan Hawke Out of Time