“You’re Holding Up a Mirror, and the Reflection is Ugly”: Chucky Creator Don Mancini on Horror Screenwriting

Being provocative comes with the territory if you’re working within the horror genre.

If you’re doing the job right you have to do some of that. It’s not just to get attention. One of the things you’re doing as a horror moviemaker is holding up a funhouse mirror to people or the culture, and because of the genre, that reflection is ugly. You’re dealing with some of the more disturbing aspects of life and people, and if you’re doing that successfully you have to cross those lines of propriety.

My first memory of horror is watching the original Dark Shadows TV series at four o’clock in the afternoon in the late ‘60s. I was three years old and remember asking my mom, “What is a shadow?” She probably pointed to a shadow on the wall; I’m sure I didn’t consciously grasp the metaphoric implications of the title. Unconsciously, I must have, even at that age, because I was entranced.

As a kid, I had some conscious understanding of being, at that age, stronger than I thought. In 1976, what both The Omen and Carrie had in common that appealed to me was their vision of children who magically, supernaturally, telekinetically punish their enemies. That must’ve been part of my attraction—the idea of being able to supernaturally kill people who are mean to you.

When writing a screenplay, I’m very conscious of what I’m doing. Any writer works, to some degree, on an intuitive level, but I consider myself at least as conscious as I am intuitive—especially with concepts. When I created Chucky, new slasher franchise films that were fronted by monstrous characters were very in vogue at the time. I wanted one of my own.

Chucky (voiced by Brad Dourif) decompresses from a long day by murdering Claire (Grace Lynn Kung) for sport in Cult of Chucky. Image courtesy of Universal and 1440 Entertainment

My dad had worked in marketing and advertising, so I was exposed to that world in childhood, when I accompanied him to New York on business trips he would try out bubblegum campaigns on me. But when I was about 21, I began raging against the cynicism of Madison Avenue. That was my initial idea: A dark satire about how marketing affected children. I approached it as theme first, metaphor second.

I certainly did not create the living doll trope, but I realized that it had never been done in a way in which the doll is treated as a full-fledged main character, with a character arc and pages of dialogue. I was very conscious that that was the real innovation of my idea. Shortly after Gremlins, pre-CG, animatronic puppet effects had reached a level of sophistication in their emotive ability that could handle that. I saw an opportunity there.

One of the things that attracts young audiences to Chucky is that he is childlike, in stature and in physiognomy. He’s not a child, but he is a child’s toy. There’s a very strong link there. He’s small, he’s underestimated, and he bucks the status quo. Often, the way he operates—particularly in the earlier movies—is that he goes after authority figures. Chucky is a very versatile character who can be plugged into an array of different subgenres—horror-comedy, old dark house movie, woman in peril movie, mental institution movie, etc.—and it works. He is a key to unlocking different genre rooms or alleyways.

The horror genre can be divided into two categories. There’s gritty horror, which I define as stuff like The Texas Chain Saw Massacre or Saw. The other subcategory of horror, which I’m interested in, is operatic and stylized. I’m more interested in stylized violence than graphic violence. Creatively, it’s interesting to put together and show those contrasting colors: ugliness and violence against elegance and beauty.

Sometimes I think, “Is that part of the gay in me?” There are a lot of gay guys in horror: We’re attracted to so-called “monsters” but see their humanity, as well, and we identify with their alienation and their perspective on the violence that they commit. This is very cliché and a huge generalization, but one that I personally feel is flattering, so I don’t mind it: Gay guys are often into stylization and the operatic.

There are some filmmakers—Tobe Hooper was certainly one of them—whose good purpose is to rub your nose in ugliness. Then there’s someone like Brian De Palma, who’s obviously not gay, but is doing something I’m more interested in. Wes Craven’s concept of the dream world in A Nightmare On Elm Street is inherently stylized. I love its visual metaphors, stand-ins and signifiers for death and violence that are distinct from the death and violence itself. A key example of this is from Jaws: It’s the ripples on the surface of the water or the gun barrels that imply what’s going on. 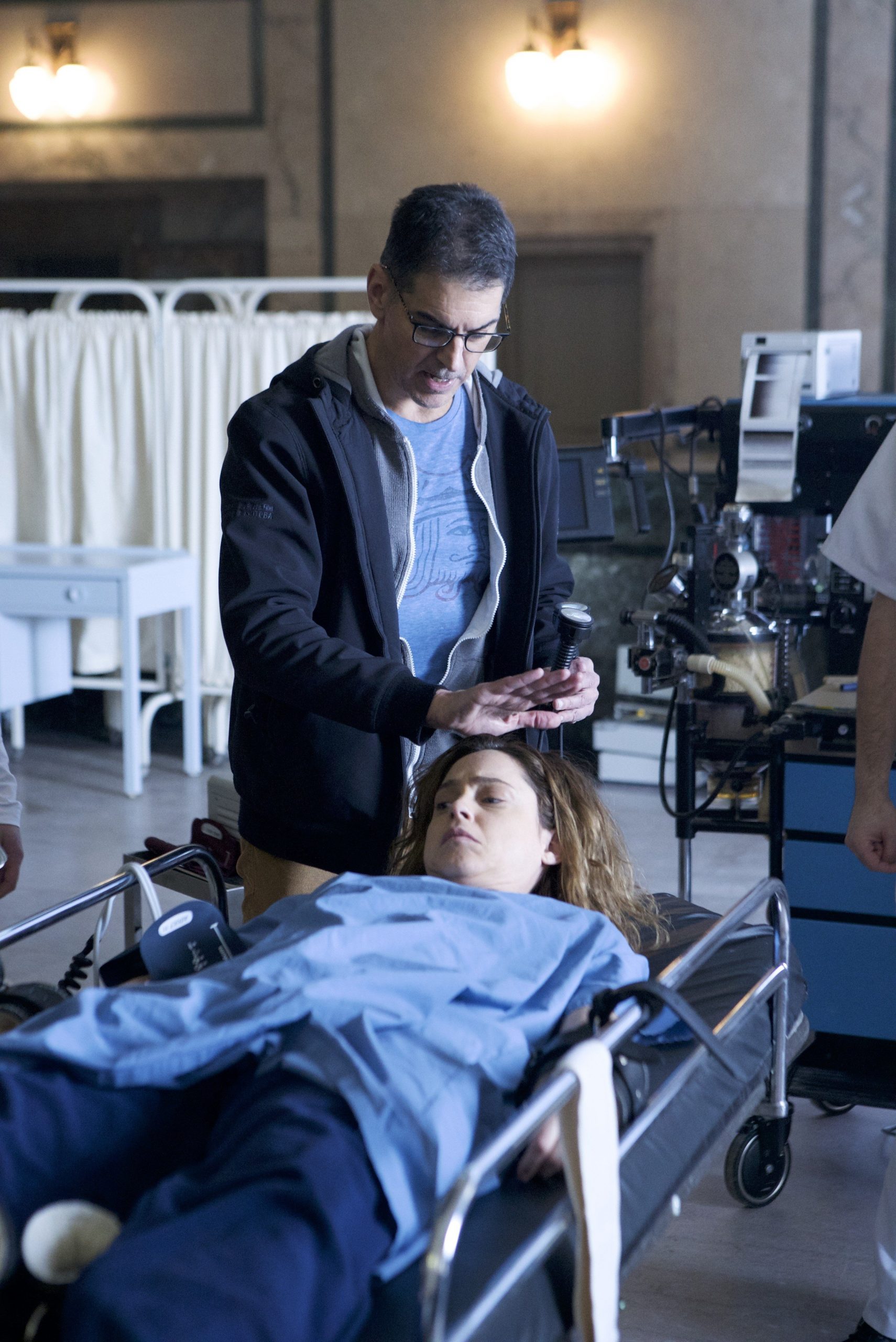 To become a better horror writer-director, be conscious of flexing new muscles. Become more discerning. When I made Seed of Chucky, I felt like I wasn’t making a horror movie, but a comedy with horror overtones. When I made Curse of Chucky, I felt that I was making my first proper, suspenseful horror film, so that was a whole other set of muscles. And Curse of Chucky and Cult of Chucky are certainly more camera-oriented than Seed was—partly by design, but also because I got better at camera-driven work.

My scripts—even the ones I didn’t direct—are very visual and specific. Sometimes to the annoyance of the directors I work with, I write camera movements shot by shot by shot. Once I knew that I would be directing, that didn’t really change. Even the films that I didn’t direct, I wrote as if I was going to. Of course, directors brought their own stuff to it, and in many cases improved it. Film is a very collaborative medium, despite what anyone tells you. I’m ambivalent about the auteurist thing because I’m on both sides of that fence: I’ve had times when I resented the authorial presumptions that directors have made, but also, I’ve created this character and written all the movies, so a decent case could be made for Chucky functioning as an auteur during the course of this franchise.

The so-called “earnest slasher movie” can’t have the impact today that it had 30 to 40 years ago because the shock value has long since worn off. But every screenwriter or filmmaker in genre has a dialogue with the culture. You’re not doing it in a vacuum. One of the genre’s biggest values is that it often reflects the times through a metaphoric prism, and the times themselves have evolved. Chucky came out of a very specific ‘80s Reagan-era mentality. A dark satire about selling things to children was a very Reagan-era concept, and a legitimate, prickly fear in the zeitgeist to grapple with and reflect in a horror movie. Now, certainly in the past few years, we find ourselves in a brand new world of horrors.

Dolled up: Tiffany Valentine (Jennifer Tilly) toys with Chucky in a scene from Cult of Chucky

The American Horror Story: Cult premiere dealt with the horror of 2016’s election night in a way that was amusing: “Holy shit! This can’t be happening!” Part of the writing of Cult of Chucky was during Donald Trump’s candidacy, so I’d been thinking about it for years before Trump was an issue. But, when I got on a plane to Canada to start shooting the movie the day after the election, there was this disgruntled, middle-aged white man passenger who made himself known to everyone and insisted on barging past a line of people, because he was in first class. Even though they said, “Sir, you can’t board until your zone number is called,” he was like, “Fuck you, I have a first-class ticket,” and he brazened his way past and security guards had to stop and waylay him. Then, later, on the plane, before we took off, on his iPhone, he was loudly playing a white supremacist speech. Others in the vicinity were horrified. Someone said, “Sir, can you please turn that down?” and he said, “What are you gonna do about it?” I’m sitting there like, “It’s mere hours after this fucker has been elected and look at what has been unleashed.”

Making a movie in another country, you’re very psychologically, culturally and geographically displaced from all of that happening, but still aware of it each morning when you get up and turn on the news, to hear of some new atrocity every day. Like many of us, I was feeling this heightening of anxiety in my own head about the world in which we’re living. When I did all the things you do as you prep a movie—re-writing the script, working with the department heads, designing sets, planning shots, costumes, casting—the one thing I did have consciously in my head was, “I hope that the anxiety that I am feeling makes its way into the movie, because I know that that would only lead to good.”

What we do matters to a lot of people, and in a way, they own it with us. One of the great things about working in the horror genre is that the fans are very passionate, very vocal, and they’re there for life. You get a dialogue with the culture in this genre that you don’t with, say, a romantic comedy. (I may be wrong about this, but I’m not aware of any romantic comedy conventions!)

Maybe you think horror is “bad art,” but it’s a legitimate expression of me. It’s very personal. Art is about talking to people, about communicating. If you accept that theory, then your voice isn’t lost.

We used to joke in the Hannibal writers’ room: “If any of us is horribly slaughtered, it’s gonna be great for the show!” This is the sort of thing that causes people to say to horror filmmakers, “Why are you like this? What is wrong with you?,” but I guess this is it: If I were to find myself at the knife’s end of a psychopath, there will be part of me that is well aware of the irony of that. Some dim part of me would say, “Huh,” and chuckle. MM

—As told to Jeff Meyers

This article originally appears in MovieMaker’s 2018 Guide to Making Horror Movies, featured inside our Fall 2017 issue. Cult of Chucky was released on Netflix and on Blu-ray, DVD, and VOD with an additional unrated version October 3, 2017, courtesy of Universal Pictures Home Entertainment.

How to Succeed as a Black Moviemaker—Or a Moviemaker Who Happens to Be Black
Eyes Open, Ears Open, Travel Everywhere: Learn From Martin McDonagh’s Screenwriting Philosophy