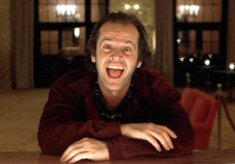 Nobody ever forgets the Overlook Hotel and its wintry garden labyrinth, that elevator slowly gushing rivers of blood, the crayon-scrawled “REDRUM,” or Jack Nicholson’s demented sneer through the fresh axe wound of a bathroom door.

Stanley Kubrick’s 1980 horror landmark The Shining isn’t just a Stephen King-disapproved adaptation, it’s one of those unsettling film experiences that stains your brain, perhaps for subliminal reasons that most poor mortals can’t comprehend. At least, some obsessed souls would like to think so.

Named for the off-limits portal where Nicholson encounters a bathing dead woman, Room 237—a riveting conceptual documentary that’s been racking up awards and international festival prestige—reveals the radical discoveries of five disparate theorists concerning the hidden symbolism and meanings in Kubrick’s onscreen mirages. Via haunted voiceovers and music, impressionistically curated clips (largely from the master’s oeuvre) and no talking-head interviews in sight, the film posits that The Shining might be about Native American oppression or the Holocaust, and introduces a forward-backward dual projection that rivals the Pink Floyd-synched The Wizard of Oz for freakish serendipity. Or is the whole thing Kubrick’s apology to his wife for helping NASA to fake the 1969 moon landing?

A testament to the craft, intelligence and playful wit of L.A.-based filmmaker Rodney Ascher, Room 237 grapples not just with conspiracies and crackpots, but the search for meaning and the indelible mark of cinema itself. By phone, MovieMaker took another Big Wheel spin through those creepy carpeted hallways with Ascher.

Aaron Hillis, MovieMaker Magazine (MM): Plenty of movies have collectively gotten under our skin, but what convinced you that a sampling of far-out interpretations of a 30-year-old horror flick could become a feature on its own?

Rodney Ascher (RA): I’m not sure at what point it became clear, but from the time that Tim Kirk, a friend of mine who became the producer, sent me a link to Jay Weidner’s Apollo 11 [thesis], I immediately knew that could make an interesting essay film. I had done a short, The S From Hell—based on people who have this unusual childhood phobia of a TV company logo—in a style similar to Room 237 with voiceovers and clips, trying to make it moody and atmospheric. Then the two of us started researching online, and we were astonished by how much is out there. Very quickly, we decided it would be multiple points of view, and embrace the tension and complications that would create. If Person #1 says it’s “A” and Person #2 says it’s “B,” how can we reconcile those ideas at once?

MM: Were any other films with rabid cult followings considered as the entry point?

RA: We started with The Shining, and while we looked at others, we certainly didn’t discover any other film that creates such a body of work on this level. There are some nice parallels and connections between The Shining and Room 237, not the least of which was people stuck in a maze. Very quickly, all sorts of exciting metaphors and analogies started popping out that might not have made as such sense with another movie. It was also important that it was a movie I loved because I was going to spend the next year-and-a-half of my life watching it one frame at a time.

MM: The way Room 237 is put together, from the disembodied voices to the foreboding score, adds mystery and intrigue. What was your biggest eureka moment while making aesthetic decisions in the editing room?

RA: There’s a scene where Bill Blakemore recalls going to the Stanley Hotel and talking to the manager, and we’re looking at Jack Nicholson entering the hotel and talking to Ullman. How effortlessly it seemed your brain could switch over and project different characters onto these same people that we’ve been seeing one way already. So now Nicholson is Bill Blakemore, now he’s Stanley Kubrick, now he’s Jack Torrance, now he’s Jack Nicholson—all changing by the context of what shot is next to it, or what we’re hearing underneath it.

It’s related to ways to watch The Shining that aren’t exactly the same, but put in context with the Kuleshov Effect, where the same shot in different contexts could have very different meanings. Lev Kuleshov edited the same generic reaction shot of a guy looking at a bowl of soup or a child sleeping in a coffin, and could project the proper emotions on the same neutral face. That became exciting to explore, to see how far I could push it before it broke.

MM: Since you’re re-contextualizing in a movie about re-contextualizing, you get to be a neutral chronicler while still editorializing with every clip and cut. Was it ever important for you to be persuaded by your subjects’ theories, even if they seemed bonkers?

RA: If I didn’t understand something, I wouldn’t include it. I tried to lobby as hard as I could for each reading while I was doing it. I thought them all pretty persuasive, especially since I was doing most of my research at three o’clock in the morning. This movie was cut together in a home studio after putting a baby to bed at 8pm, washing the dishes, then starting work at 9pm. In the wee hours, some theories sent shivers up the spine.

MM: Maybe you could come full circle and make a horror flick about you making this movie. What was creeping you out?

RA: When John Fell Ryan did the forwards-backwards thing, there’s the moment when Nicholson’s face lined up with the dead twins’ bodies, and the blood on the floor and walls spackled his lips and nose so that he looked like a clown. He was describing it, but I couldn’t see it in front of me. When I put the two shots together, it was one of the most horrible things I’d ever seen in my life. Of course, that was an experience I wanted to share with an audience. [laughs]

Sometimes I would be able to scroll through while people were talking, other times I wouldn’t necessarily see what they were saying until later. When it starts to add up in the middle of the night, it would get eerie, like opening up the Necronomicon. Maybe these are secrets that we are not meant to know.

MM: I was fortunate enough to see The Shining Forwards and Backwards, as they called it at Fantastic Fest 2012. There was rowdy applause when the film lined up in the middle, just as Scatman Crothers watched TV in bed.

RA: Yeah, that was great. What’s cool in that moment is it made me reconsider that part of the film, the big decisive moment when Scatman decides to go to the hotel. Because we’ve just seen the entire movie disappear into his head in a feedback loop, the implication is that he’s psychic, so not only does he know what’s happening out there, he also knows he’ll be [murdered], but has to go anyway.

MM: Do you have any of your own theories about what’s lurking under the negative of The Shining?

RA: It’s funny, I’m at a point where I’ve read so much that I don’t necessarily know if an idea I had about The Shining is my own. [laughs] One thing that occurred to me when re-watching it is that the whole sequence of scenes around the time that Danny walks into room 237 and Jack has his nightmare, might be edited out of sequence, in that there’s only one visit to room 237 and both Danny and Jack are there at the same time. If you’d rearrange the order of the shots, it would reflect that and make sense for a couple reasons, not the least of which is explaining Jack’s nightmare and why he leaves that room, goes right back to Wendy, but doesn’t say anything. If he left the room way at the beginning of the sequence and was still in a dream fugue state, he’d actually be telling the truth as he saw it. Clearly, Kubrick had been playing with out-of-sequence chronologies as far back as The Killing.

I experienced this movie as a little kid, then again as an adult. It becomes a very different movie depending on whose shoes you’re wearing when you watch the film. When I was 11 or 12, I identified with Danny. What’s scary about his situation is that he knows what’s going to happen but because he’s a kid, he’s powerless to stop it. He can’t tell his mother and father he had a bad dream, and therefore his father can’t take this job. He sees the crushing inevitability of this stuff happening. But now, especially while I was working on the film, I felt a lot like Jack working on his novel. [laughs] The fear of not being able to reach your ambitions and provide for your family, or resist the influence of people whose interests are not your own—in his case, ghostly bartenders—is pretty nightmarish, too.

MM: So, be honest. Was the moon landing faked?

RA: Well, if anyone was going to fake the footage, Stanley Kubrick was incredibly well qualified. The eerie thing is that at least five people have five very different ideas about the movie, so the idea that everything they see is in there, intended for that purpose by Kubrick, seems unlikely. But whenever I tried to eliminate any stray thoughts, there’s always as many yeses. I’d watched some of the extras on 2001: A Space Odyssey, and I had never realized that he was actually consulting with NASA in the making of that film.

Jay goes out on a limb because he’s not just talking about the symbolic meaning but a historic event that would have large consequences if it was proven the way he describes, but if I was going to spitball a fictitious scenario, it’s plausible to imagine some NASA guy going up to Kubrick and saying: “Hey, we’re going to the moon in two or three years, and we’d like to get some good movie footage while we’re there. Have you got any pointers for us, Mr. Kubrick?” “Well, how much payload can you devote to the movie equipment? How much training are these astronauts able to get in cinematography? What kind of gloves are they going to have to wear? I don’t know, guys, sounds like a real pain in the ass. Why don’t you do like what we did for scenes in Sparatcus. Go to the moon, have a great trip. Shoot in a studio, get it perfect. It’s all just for P.R., right?” MM

Getting to The Other Shore: the Inspiring Diana Nyad Documentary (Part Two of Interview)
by Lara Colocino
Be There: Barbara Kopple on Making Documentaries and Running from Crazy