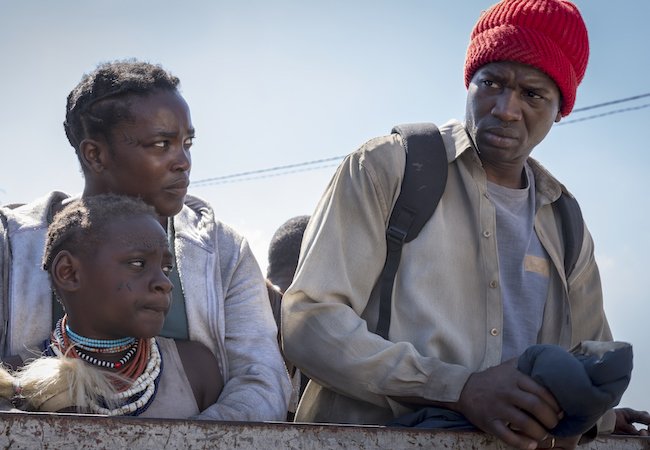 His House, the feature directorial debut of Remi Weekes is the story of a young couple who flee civil war in South Sudan only to find that the ghosts of their pasts have followed them to their new home in England.

Most haunted house stories distance you from the characters, because somewhere, in the back of your mind, you think they might deserve to be haunted: If they were smart, they would just leave. But the couple in His House, Rial and Bol Majur (played by Wunmi Mosaku and Ṣọpẹ Dìrísù), are legally barred from leaving their public housing. And even if they did, the ghosts would follow.

Weekes deeply invests us in the Majurs’ trauma, and their brave efforts to escape it. The film examines the condescending concept of the “good immigrant” — Bol is told outright to be “one of the good ones” — and how many Westerm countries hold refugees to higher moral standards than they hold themselves.

But the Majurs aren’t saintly Job-like figures, either — they have made complex and spur-of-the-moment decisions and mistakes that haunt them. You can listen to our MovieMaker Interviews podcast with Remi Weeks on Apple or Spotify or above.

Ṣọpẹ Dìrísù as Bol Majur in His House, directed by Remi Weekes. Above:

“A big part of this film is a conversation about the ‘good immigrants’… the need for immigrants or others in general to be good and to be seen objectively as angels, rather than more complicated, more difficult characters,” Weekes says on the podcast.

“What we wanted to do with this story is show these characters in quite clearly a sympathetic light, but then throughout the film, murky the way you see them and suggest that these people that you’ve gotten so sympathetic for are not black-and-white angels, but complicated… characters who have been through circumstances where easy answers are hard to come by. To get to the U.K., you have to you often have to make really hard choices.”

Weekes also talks in the podcast about a particularly harrowing passage in the film in which we come to understand some of the hard choices the Majurs had to make. Weekes says he wanted the scene to have some ambiguity.

“What we’ve tried to show is a very messy situation that often happens when you’re reading about people migrating from war-torn countries — that people often find themselves losing family members, and find themselves finding themselves split up from each other and having to make sacrifices to get to a new to get to a place of safety,” he says.

The conversation adds nuance to the current plight of families separated at the United States border — but also illustrates how difficult and unfair it is to generalize about immigrants anywhere.

Weekes wrote His House with Felicity Evans and Toby Venables after years of making short films, commercials and videos. Though he jokes on the podcast about how tired he became of directing commercials, he was at the top of the field: He won a Gold Lion at the Cannes Advertising Festival. His first short film, 2016’s Tickle Monster, premiered at SXSW.

His House debuted at the Sundance Film Festival in January, and Netflix acquired the rights to it just before the festival began.

He evolved as a filmmaker with partner Luke White on Tell No One, a production company that prolifically produced experimental films that drew millions of views. (You can watch their films here.) The goal of Tell No One was to keep trying out ideas.

“If it’s good or if it’s not good, it doesn’t matter,” he says. “We’ll just put it on the Internet. If people like it, people like it. If people don’t like it, it’s the Internet — people forget about it. But the most important thing is to go back into the studio the next day and do something else. We called ourselves Tell No One because it was about not being too precious about our ideas, and to let them go. I feel like as creatives we get so bound to what we’re working on, it can be the death of inspiration.”

His House is now streaming on Netflix.

How the Ashland Independent Film Festival Is Fighting Through Fires and the Pandemic
His House and Refugee Horror: a Haunting No One Can Escape