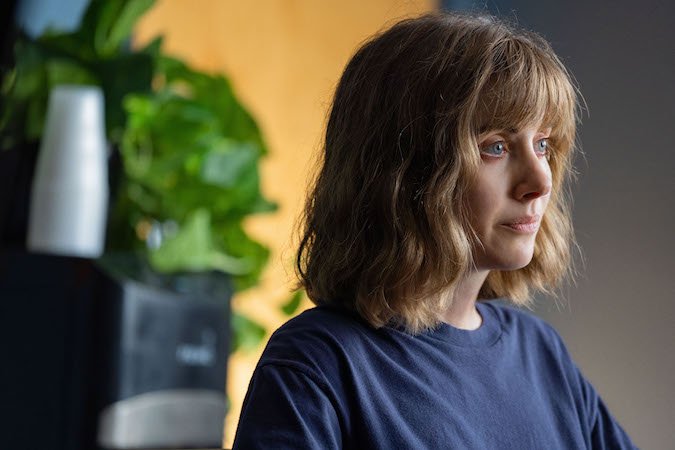 (Spoilers about the Horse Girl ending abound in this story, based on our interview with co-writers Alison Brie and Jeff Baena. Please don’t read it if you haven’t seen the film.)

Horse Girl, now airing on Netflix, may initially seem like a lighthearted character study of a young woman named Sarah (Alison Brie) who cares more about horses and fantasy-laden crime shows than she does about real life. But it soon becomes tragically apparent that Sarah isn’t sure what reality is.

The film shows us, with patience and empathy, that Sarah seems to be battling an unnamed mental illness. It seems to be schizophrenia. Brie said at the Sundance Film Festival premiere of Horse Girl that her grandmother had schizophrenia, and that she has also lived in fear of it.

People often think schizophrenia refers to split personalities, but it does not. Rather, it is a disorder with several symptoms, including an inability to determine what it is real and what isn’t. It typically strikes by the mid-30s, Sarah’s age in Horse Girl.

Jeff Baena and Brie c0-wrote Horse Girl, and Baena directs. The film allows for many interpretations, and Brie and Baena have taken care not to shoot any down — though they have stressed that Horse Girl isn’t a comedy. Audiences may laugh at some quirky opening scenes and Sarah dressing kind of like a Napoleon Dynamite character. But she isn’t meant to be ironic or funny — she’s deeply disconnected from society at large.

Also Read: Horse Girl Writers Jeff Baena and Alison Brie on What It Means to Be a Horse Girl

She’s a horse girl dealing uneasily with adulthood. Baena has described a horse girl as a young woman who “sort of feels outside of the sort of normal social spectrum… They’re not alphas, they’re not betas — they’re almost like omegas, floating above and outside of that.”

Brie has said horse girls are “outside the normal social structure in a high school or middle school because they have other interests. They are super content living their life focused on those interests. … There’s a very mysterious confidence that comes with having these other interests.”

Horses bring Sarah joy — especially the horse she’s had to give up for unstated reasons. Visiting the horse is therapeutic. And we understand, eventually, why she needs things that are calming and therapeutic.

Being a horse girl isn’t the greatest source of Sarah’s disconnection from other people. We begin seeing her dreams — chilly scenes out of a science fiction film — and her confusion about time. We see that water has unusual significance to her. And we learn that her mother had mental illness, and died as a result.

She comes to believe that she has been abducted by aliens who have cloned her. Horse Girl takes care to show why she believes this, and to respect her belief. It shows us all of the evidence that has led her down this line of thinking.

We can believe that Sarah really was abducted and that no one else understands this truth, or we can believe what I personally think is the simpler answer: Her severe mental illness has made something unreal feel very real to her.

Unlike many stories about mental illness, Horse Girl never suggests that Sarah is illogical or “mad” or “crazy” — her thinking follows a fierce and relentless internal logic.

“A big objective for us was to put the audience in Sarah’s shoes not knowing when certain things are real and not real,” Brie explained at Sundance.

She also said that she first pitched Horse Girl to Baena as “a sci-fi thriller about a woman who has a family history of mental illness, and things start happening to her and she doesn’t know if they’re real or not.”

To me, the most obvious interpretation of Horse Girl is that Sarah undergoes a kind of mental break at the end, completely losing touch with reality. Despite what we see in the final scene, I don’t think she is really beamed up by aliens at the very end. I also don’t think she is a clone.

But one thing happens near the end that seems to challenge the idea that the end of the film is all in Sarah’s mind. And it involves, of course, the horse.

Remember that in the film’s opening, Molly Shannon’s character, Joan, looks out the window of the craft store while chatting with Sarah and sees the back of a brown horse with a long tail in the parking lot. Joan is, as far as we know, a reliable person in every way. There’s no reason not to trust her point of view.

At the end of Horse Girl, before we see Sarah rise up from the Earth, we see her, dressed as her grandmother, walking the horse through the parking lot. Then we see Joan again, glancing out the store window. We see Joan’s face and the back of a woman who seems to be Sarah.

Then we cut to what seems to be Joan’s point of view: The back of a brown horse with a long tail in the parking lot.

If Joan sees the horse that Sarah is guiding through the parking lot, that may confirm that Sarah’s view of reality has been at least partially right all along: She really did take the horse from its stable and out for a walk. And since she seems to be in two places at once — in the store with Joan and in the parking lot with the horse — maybe her theories about aliens and clones are valid after all.

It’s also possible that Sarah is imagining Joan seeing the horse. But this seems unlikely, since there’s no indication that Sarah saw the horse in the parking lot at the beginning of the film, and there’s no reason to question Joan’s judgment.

We asked Brie and Baena about the Horse Girl ending, and particularly whether Shannon’s Joan is a point of view character — which goes to the question of whether we can trust what she sees.

“But it is interesting to point out — I do feel like that’s our one shift in perspective in the whole movie,” Brie adds. “Because the rest of the time you’re really on the journey with Sarah, and only seeing things kind of as she sees them and knows them to be true.”

Brie concluded: “And that shot as it is at the beginning of the film and the end of the film are sort of showing you things from Molly’s perspective, for the only times in the movie.”

It’s open to interpretation, but knowing what Joan sees may help you decide how to interpret the Horse Girl ending — and all of Horse Girl.

You can listen to our full interview with Baena and Brie right here:

Or on your favorite podcasting app: 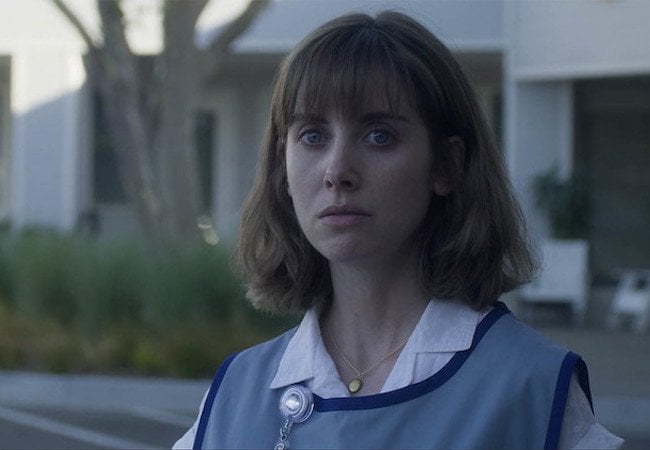 Alison Brie appears in Horse Girl by Jeff Baena, an official selection of the Premieres program at the 2020 Sundance Film Festival. Courtesy of Sundance Institute.

Here are highlights of the episode, with timestamps:

2:45: How the film suffered from skepticism and misunderstandings, and how the Duplass brothers helped make it a reality.

3:40: How much did Jeff Baena and Alison Brie want the film to be open to interpretation?

4:20: Alison Brie: “We certainly designed it so that upon multiple viewings people might pick up a little bit more of what we feel like is the through-line to the story.”

5:30: “A major crux of the film is how terrible it can be to not be able to trust your own mind.”

7:10: A tech issue arises and is handled in a humorous fashion.

Horse Girl is now in theaters and on Netflix.