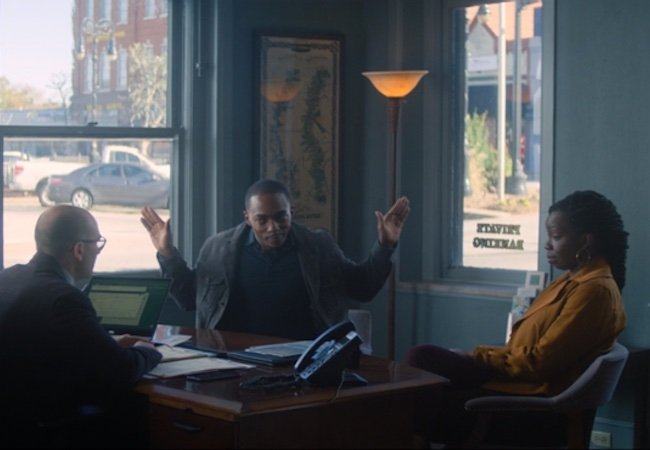 In today’s MovieMaker News Rundown: The Falcon and the Winter Soldier addresses the Marvel Universe’s greatest mystery; Promising Young Woman and Borat are recognized for great writing; a poetic new multimedia project.
But First: Fans of that pirate love story last week may also enjoy Margeaux Sippell’s story of Irish woman pirate Anne Bonney. No, she did not have a pot o’ gold.
WGA: Promising Young Woman and Borat Subsequent Moviefilm won the main movie awards at last night’s Writers Guild Awards. Very nice.
Recommendation: I finally saw Minari over the weekend and it was absolutely beautiful, filled with love, and also funnier than I expected. It joins Promising Young Woman and The Father as my favorite movies of 2020, which somehow turned out to be a pretty good movie year, considering, you know.
Here’s Some Narration From Fire Bones: “When the train took to rattlin’ I felt like my body was laughin’ — like if my bones was gigglin’. They were shaking happy. My mind’s mind said to me, zoom zoom into the Great American dark. Me and the stars, we was in beautiful cahoots.” I love that. You can learn more here about the multimedia Fire Bones from Greg Brownderville, who wrote it.
FAWS: The first episode of The Falcon and the Winter Soldier, or FAWS, as I guess we’re calling it, is great. But show runner Malcolm Spellman tells Variety that people “went crazy” over a scene in which a white banker asks Sam Wilson, aka The Falcon, how superheroes make money: “That was a really, really fun moment, where what was supposed to be a scene that mostly dealt with the issues of, you know, a Black family from a certain background dealing with a bank loan, and the fact that him being a celebrity does not transcend him being Black, turned into way more fun of, ‘Wait, how do superheroes make their money?'”
Okay, But How Do Superheroes Make Their Money?: Sam explains on the episode (spoiler alert) that “there’s a tremendous amount of goodwill, and because of that, people are inclined to help.”
What? I know, right? Respectfully, this sounds like a BS answer, perhaps because Sam is rightly annoyed with the banker. Why does it make sense that some heroes have very time-consuming full-time jobs (Tony Stark, T’Challa) while others are apparently full-time superheroes? Are you really a “super” hero if you’re getting paid? Also, wouldn’t Steve Rogers have qualified for a military pension, and Social Security? And why is Spider-Man always financially struggling (at least in the comics)? And doesn’t/shouldn’t Sam Wilson get checks from the Air Force? Also: Are we supposed to believe that Tony Stark left nothing in his will to The Avengers?
Meanwhile, Over at DC: Perhaps the only thing the DC Extended Universe does better than the Marvel Cinematic Universe is explain the whole “How do superheroes make money” thing. People who saw Zack Snyder’s Justice League know it spends a lot of time addressing this question. Barry Allen (aka The Flash) works at a pet store. Diana Prince (Wonder Woman) has excelled in a series of museum jobs. Bruce Wayne inherited it. Cyborg lives with his dad. Aquaman doesn’t seem to carry money, because he lives in the water most of the time. And Superman raked in dough as Clark Kent, newspaper reporter, a famously lucrative profession.
Oh Also: Amazon Prime’s terrific The Boys imagines an all-too imaginable world where superheroes make money from merch and movie deals.
Just Spitballing Here: A moving and shipping company using Ant Man’s shrinking powers would do really well.
Is This Rice? No, this is cheese.

Main image, above: Sam Wilson aka The Falcon (Anthony Mackie) applies for a bank loan in the first episode of The Falcon and the Winter Soldier. Courtesy of Disney+.