It’s All Relative: Mark Webber Draws on Real Life and His Own Family in Flesh and Blood 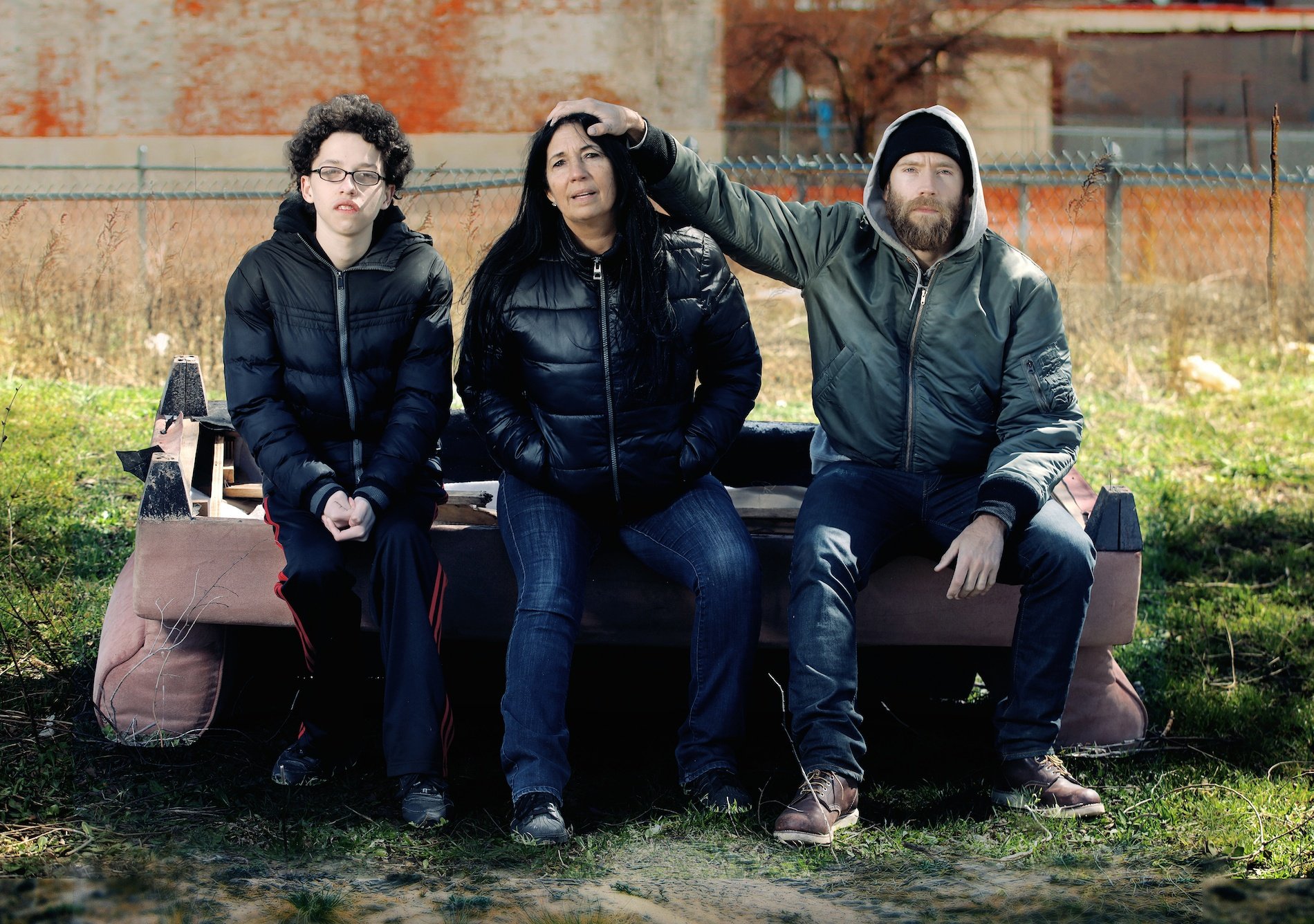 After seeing the world premiere of Mark Webber’s latest film at SXSW last spring, I wasn’t immediately sure if what I’d seen was a narrative feature or a documentary.

In a way, it’s both. Flesh and Blood is based on real life events in Webber’s life to a point where he cast his own family as themselves, including his younger brother with Asperger Syndrome, his brother’s father who struggles with addiction, his mother who ran for Vice President under the Green Party in 2012, and even his own estranged father.

It’s an intensely personal film, but it’s also one with a strong cinematic vision from an actor who’s been in films ranging from Green Room to Snow Day. This being his fourth film as a director, Webber spoke about blurring the lines between fact and fiction on film, what he’s learned as an actor while working for other directors, and his tactics to keeping your process fluid, open, and creative.

Andy Young, MovieMaker Magazine (MM): This is clearly such a personal film, what made you want to do it?

Mark Webber (MW): It first happened because my dad not being in my life is real. So that moment in the movie is the second time seeing my father since I was five years old. In reality that happened one year prior to me shooting the recreation of it. The entire time I was thinking “man I wish I was filming this.” Another thing was that the second movie I made, The End of Love, I made with my son when he was only two years old. That’s where I found my voice and knew this was the type of work I wanted to do and someone after, I don’t remember who it was, said during an interview what are you going to do next a story about your mom and that was in my mind. So that and the thing with my dad because my life there were a few traumatic events that happened and a lot of suffering I wanted to take a look at it in this way. Filmmaking and art are self-expressions and ways to heal.

Mark Webber with his family in Flesh and Blood

MM: Was any of your family anxious about the idea, or were they quick to jump on board?

MW: I’m sure there was a level with my mom and my brother. The cool thing about them, and my mom, in particular, is she has been the vocal point in a lot of documentaries about the work she does as an activist. So she is used to cameras and people being around. Leading a very public life is something my mom is used to and I knew I would be able to capitalize on that because she wouldn’t be nervous. My brother also has a public life, so it’s not like plucking your mom and brother from…

MM: Just out of obscurity?

MW: Yeah. They knew it would be challenging. My mom knew I wasn’t interesting in making a vanity piece and not a film that shows her as the best mom in the entire world. I wanted to show the complexity of our family dynamic and why. Then my brother’s life I wanted to show a similar through line that is playing out with him fifteen years later also having a father that is a junkie.

MM: One of my favorite lines in the movie is how nonchalantly your mom says “I’m running for Vice President,” because I didn’t know anything about the movie when I first walked in and I thought everything with Jill Stein was superimposed or something. But it was real. She wasn’t nervous about having that aspect of her life put on film with all the news coverage?

MW: No, I think my mom if anything would welcome that aspect was there. We kind of talked about it a little bit because that moment at screenings always gets a pretty big laugh which makes me happy because I laugh at that all the time with my mom. With big events something you think you would be sat down something really important to tell and no. I think it is because my mom is so accustomed to having so many big things happening to her all the time that she is just like “oh by the way I’m running for Vice President.”

MM: As a performer turned director, do you have a method to bring them down a bit when they are being too “on?”

MW: Yeah, I liken it a bit to when you have to give a shot. You go, and the doctor’s been doing it all day and you don’t even realize you got the shot you’ve been afraid to do. So part of how I do that is by having not a lot of lights. We don’t have anyone saying we will be shooting in five minutes. I can be an anchor and guide and just sort of go with it.

MM: You’ve worked with a lot of my favorite directors. As an actor, what have you learned about working with these talented directors that you bring onto set as the director or does any of that come through?

MW: The biggest common denominator among everyone I’ve worked for is a sense of integrity—really having a clear point of view and understanding of what you are trying to do. Every director I’ve worked with knows what their voice is, and has a real clear vision and intense passion to tell a story the way they want to tell it. I’ve also been lucky to enough to work with filmmakers, someone like Jim Jarmusch is a perfect example, who is like “I’m going to bring on the people I want and we are going to make it the way we want to do it and then I’m going to edit it and no one is going to take away my rights.” I’ve always been enchanted by writer/directors. When I worked with Ethan Hawke, that was my first experience with the actor/writer/director thing. It was great because I could see how his experience as an actor was making me more comfortable and I thought I could do that.

Webber (right) in Flesh and Blood

MM: What fascinates me about actor-turned-directors is how much trust you have to put into your Director of Photography. What I love about this movie is it feels like a documentary so what kind of preparation work you did with your DP beforehand? What was it like working with him on set knowing you would be watching dailies and to trust what he is getting?

MW: My DP Patrice Cochet is phenomenal and every film I’ve made as a director we’ve done together, so our relationship has reached the pinnacle of that shorthand with each other. He knows what I’m trying to do so we don’t even have to say anything, he just knows where to go and knows not to stop rolling because something interesting might happen even when I think we’re done. Same goes for my additional camera operator Dustin Hughes, who also produced the film. He also did all of our post-production supervising. He mixed the movie in the final hour and did the color. This is our third time working with the same editor. My good friend Tim [Dowlin] is a childhood friend and is my producer and is from Philadelphia. We have this beautiful collective of people that have this deep understanding of what I’m trying to do and of each other. That is why we were able to go and make moments like the AA sequence happen in real time just once. No takes and shooting two cameras here we go. It’s a testament to everyone’s ability and knowing each other so well.

MM: I’m an editor myself, and I really love your editor’s “This Guy Edits” series that actually delved heavily into the cutting of your film. What was it like to work with Sven on this, but also were you always comfortable showing the transparency with the editing process? Were you excited about educating people?

MW: I knew it was going to be hard and challenging for me, but part of making a movie like this and the work I do is being so wide open and vulnerable. I knew when I was handing over the keys to Sven I was like “ok man I will let you do it and start this thing with our movie”. First pass I let him know he can have a month to find the moments that speak to him because he is the first audience member. He spends his time putting it together. It doesn’t’ do it justice to call it an assembly and it is more than a rough cut, it is almost like when I walked into the first pass at this we were well on our way.

MM: Really? Because most filmmakers are so worried about seeing the first pass.

MW: Yeah, and I think it comes back to what I said about working with Patrice it is like this is the movie we’ve gone in together. We both just keep getting better and better and I came in and I saw “ok cool this is working.” Then we started to refine the process. We would have a back and forth and the moments I wanted to refine. Play around structurally then he has his voice and we come together.

MM: What advice would you tell young filmmakers who want to tell very personal stories but may be slightly intimidated?

MW: They here this a lot which is easier said than done but just go do it. You got to go out and do it now…after you are done reading this article [laugh]. That or have that sense of urgency. There is no excuse anymore. Ten years ago, yeah there was an excuse because you might not be able to get the camera you want. Today no. Technology has blown that excuse away. Go film a movie on your phone. For me, take it from me first hand, you don’t have to have a lot of money. It can be incredible. Just go out and tell the stories you want to tell in the way you want to tell them, and you can only get better. In this day in age nothing can stop you. Just go for it. I’m so interested in seeing new work. People who are experimenting and you shouldn’t let anything stop you.

How They Did It: This Director Over-Prepared in Order to Get Novitiate Shot Before a Hard Deadline
Austin City Limits: Noel Wells On the Challenges of Making Mr. Roosevelt in the Lone Star State