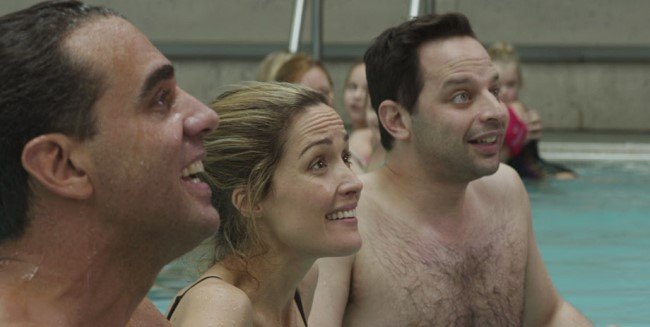 Adult Beginners, premiering tonight at the Toronto International Film Festival, follows the story of a young entrepreneur whose world suddenly crashes on the eve of the most important day of his career. In the following recount, producer-turned-director Ross Katz remembers how life almost imitated art, with his film’s near-death at the hands of a nosy bureaucrat.

I never want to apologize for the look of a film because of its budget or schedule. Instead, I want to aim for the stars, knowing that compromises will be made along the way.

Truth is, I just don’t like shaky-cam, or indie-cam, or what people call a “low-budget feel,” for myself. I love it when other people do handheld and low lighting, but it’s just not the look or the feel I go for. So the challenge on Adult Beginners was accomplishing a clean, contrasty, crisp commercial look with no money and no time.

We knew we were starting out with a very tight schedule – 22 days. We knew it was tough to cram in all of Liz Flahive and Jeff Cox’s beautiful script into that short amount of time. I was so lucky as a director, because my three leads were cast before even I was. Starting out of the gate with Rose Byrne, Nick Kroll, and Bobby Cannavale was a gift. It meant I could focus on the rest of the roles, and balance that very intense five-week prep time with location scouting, design work, and shot listing with my DP, Vanja Cernjul.

That all sounds good, but it’s not quite what happened.

New York is known to be an incredibly film-friendly state, so never did I anticipate the series of disasters that would befall our production because of locations. We were super lucky to have high-end location manager/photographer Michael Hartel as our locations manager… but Mike had no idea what was coming. Neither did we.

Because so much of the action of Adult Beginners takes place in a main house, I was picky with finding that house. It wasn’t just a house I was looking for – it was a feeling. The house, the streets, the neighbors; the environment around which we would build our movie. So, we set out, in the cold days of November and December to find a town that was right for us. We fell in love with New Rochelle. The houses told our story perfectly, with its pretty, tree-lined streets, lovely variety of architecture, and strong suburban, non-Manhattan feel. Mike set out to do the hard work (the location manager’s work is always underestimated, in my opinion) along with our great producer, Jared Goldman, of courting the community.

We found great homeowners – excited and willing to take the plunge with us. Our art department, headed by genius production designer Ola Maslik, started planning for this house and this town, begging, borrowing, and probably stealing to create gorgeous sets that never, ever felt “low-budget” or ramshackle. All systems were go and things were looking up.

And then, the other shoe dropped. Two days before our hiatus (for Christmas and New Year’s), a bureaucrat in the city of New Rochelle stopped us in our tracks. She said she had decided to poll the neighborhood to see if they were for or against us shooting there for 11 of our 22 days.

When you’re working on a budget and someone literally tells you that your locations are gone, your hero house is gone, and therefore all your art department work is gone, well, it’s a disaster of catastrophic proportions.

In a state of panic and fear, we begged, we pleaded, we called the Governor’s Office, the NY State Film Office, the Westchester County Film Office. Everyone was trying to help, but one person was literally stopping us from making our movie. How could we possibly prep another town? How could we prep another house? There was no money and no time. And, we couldn’t push our schedule – our actors all had other commitments.

I was devastated; completely crushed. So, on a grim Thursday (now one day from hiatus), with the production office in a panic, we set out to completely re-design the movie. We went and scouted Ditmas Park in Brooklyn. While Ditmas is lovely, I knew that in my heart of hearts, I simply could not make the movie I wanted to make in this place. It just didn’t tell our story. We trudged through snow and ice, looking at house after house. We picked one, but I was so depressed I thought I might cry. This wasn’t about a simple swap – this was changing the entire movie.

Mike Hartel and Jared Goldman never gave up, though. They fought and fought hard. And, somewhere after New Year’s (just weeks before shooting), we learned that the bureaucrat had gotten 10 responses to the “poll” – and, thankfully, eight of them were positive. We would be allowed to shoot in my dream location and make the movie I felt the script deserved. MM