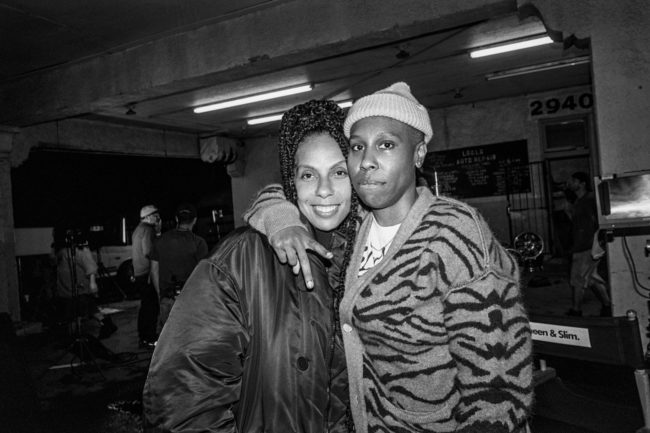 Lena Waithe and Melina Matsoukas, the writer and director, respectively, of Queen & Slim, began their collaboration on one of the most memorable TV episodes of the decade: a Master of None story called “Thanksgiving.”

“Thanksgiving,” which Waithe co-wrote with Master of None star Aziz Ansari and which Matsoukas directed, is family coming-out story told through a series of Thanksgiving gatherings. The episode won Waithe and Ansari an Emmy for writing.

But it also inspired Waithe and Matsoukas—celebrated for her video work with Beyoncé, Rihanna, and Snoop Dogg—to keep working together. For our new issue, they talked about the strength of their writer-director rapport and how it serves Queen & Slim. The film is about a young couple (Daniel Kaluuya and Jodie Turner-Smith) whose first date is bedeviled by racial profiling that quickly escalates.

Also read: How Dave Chappelle Inspired a Scene in Dolemite Is My Name

This article is excerpted and condensed from that conversation.

Lena Waithe: The first time we ever worked together was on “Thanksgiving,” our episode of Master of None. But even before that, we had met and had already struck up a chemistry over the phone. Working together felt natural very quickly.

I’m not the kind of writer who writes with certain actors or directors in mind; I just try to write something and decide whether or not there’s enough in the material to put something honest on the page. So, I’m never thinking about who to work with until I’m done writing. I didn’t think about the importance of this being your first feature, either. I just figured that, based my experience with you on “Thanksgiving,” this was a movie we should do together. The realization that this was the first film for both of us only came later, and by then I was confident that it could be really special.

Melina Matsoukas: You write scripts that are very visual in nature, and as a director, that affords me the space to let the script evolve into something that reflects my own voice as well as yours.

Waithe: I just had a gut instinct that Queen & Slim was the perfect movie for you to direct, and I always trust my gut.

Matsoukas: We both trust our gut, but also trust each other, and that trust comes from the fact that every conversation we have about the script is purposeful. We didn’t discuss anything about Queen & Slim—the racial identity of each character, the clothes they wear, what they think, feel, and say, how they say what they say—without intent behind it.

During the writing process, I think my job is to be a supportive creative partner and help move the story toward a place where I’m feeling good about it. Moviemaking is very much like running a marathon: After you’ve kicked us off with the screenplay, you pass the baton over to me in production and then you transition into a supporting role. Once you hand over that script, I bring it to life by adding the details that elevate the characters. But both of us are playing lead and supporting roles at different times in the process.

We also have conversations as you’re writing that help me find and prep locations. I love having a lot of creative options and it’s sometimes hard for me to make a final decision, so I trust you to help me get there—to guide me to myself, in a sense. That’s definitely not true of every writer-director relationship; I think it’s unique to ours. But that dynamic was important to the storytelling in Queen & Slim. This film wouldn’t exist if it wasn’t for both of us working in that way.

Waithe: I agree. And honestly, I think more writers and directors should take on our vibe, because at the end of the day the story starts with the writer. I think that the reason a lot of movies don’t end up working is because the director and writer are so disconnected.

… “Thanksgiving” was sort of an aspirational piece—it was almost as if we were saying that everyone’s next Thanksgiving should be like the one in the episode. That wasn’t my own happy ending, but I wish that it was. I want to dream about a world in which black families embrace their queer children. So that way, screenwriting can be an aspirational pursuit.

The new issue of MovieMaker, with the full conversation between Lena Waithe and Melina Matsoukas, is available now.

10 Films to Seek Out at AFI Fest Presented By Audi 2019 (Sponsored Content)
Robert De Niro on The Irishman’s Credibility: ‘I Wasn’t Getting Conned’