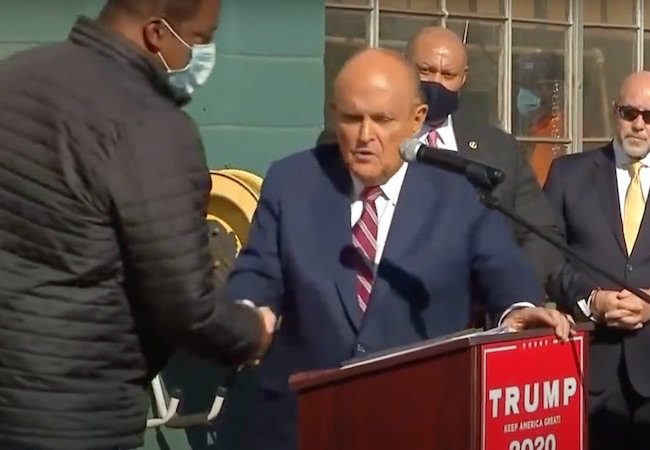 Rudy Giuliani wouldn’t have been caught in a compromising position with Borat’s daughter if he and his team were better at vetting. But that pales in comparison with his latest error in judgment: choosing a convicted sex offender as his first witness to argue that Democrats stole the presidential election.

In Borat Subsequent Moviefilm, Sacha Baron Cohen and his team lured a gullible Giuliani into meeting with a young reporter (actually Borat’s daughter Tutar, played by Maria Bakalova), drinking with her, and then joining her in her hotel room. During a pandemic.

Footage of him reaching down his pants, perhaps to adjust his shirt, perhaps for other reasons, forced him to issue a statement denying anything inappropriate occurred. But a mere two weeks after the release of the film, Giuliani has another vetting problem — this one much more consequential than a comedy movie.

On Saturday morning, Giuliani held a news conference to unveil his evidence of what he contends is widespread voter fraud in Pennsylvania, the state that put Joe Biden over the top in Electoral College votes, according to every major network, including Fox News. (As Trump supporters have noted, networks do not decide elections — states do. But networks do make projections based on states’ numbers.)

The very first witness Giuliani produced Saturday was a man named Daryl Brooks, who said he was among Philadelphia African-American voters who wanted a second Trump term because of “the 401k plan and how they were excited because of their finances.” He told reporters he went to be a Republican poll watcher, but was not allowed to take pictures and that he was “harassed by some of the Democratic Party poll watchers.” He was kept six feet away from ballots, too far to see if people voted multiple times. He did not contend that he witnessed any repeat voting, only that it could have happened.

“Give us an opportunity as poll watchers to view all the documents, all the ballots,” he said.

Daryl Brooks is a fairly common name, but Giuliani and Philadelphia-area Republicans apparently missed a long public record for Brooks, who has run for several offices in New Jersey.

—This April 2, 2019 NJ.com story that says Brooks “was convicted in 1998 of fondling himself in front of two girls and served three years and eight months in prison.” (The article notes that Brooks “continues to profess his innocence, saying he was set up by Trenton police and elected officials who were retaliating against his activities as a city activist.”)

—This March 31, 2019 NJ.com story that also notes that Brooks “served time in prison after being convicted of exposing himself to two young girls in 1998.”

—This website explicitly dedicated to negative information about Brooks.

But Trenton Mayor Reed Gusciora, a Democrat, called it “scary” that Trump would rely on someone with Brooks’ record.

“This falls in line with the Borat legal defense fund,” Gusciora said. “It’s scary that you have someone like Rudy Giuliani in the position that he is in.” 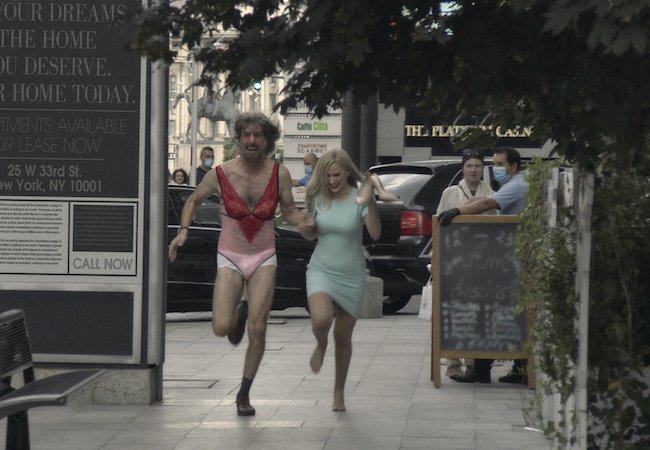 Sacha Baron Cohen and Maria Bakalova fleeing the scene of a prank on Rudy Giuliani in Borat Subsequent Moviefilm. Courtesy of Amazon Studios.

It is absolutely true that a convicted sex offender is as capable as anyone else of witnessing voter fraud. But as Giuliani, a former criminal prosecutor, is well aware, attorneys would likely use his legal history to raise questions about his believability.

The Trump campaign has sued to block the certification of ballots from Pennsylvania and Allegheny counties, arguing, according to the Pittsburgh Post-Gazette, that “ballots were reviewed and processed ‘without review by the political parties and candidates’ — who were placed ‘far away from the action.’”

That parallels Brooks’ complaint that he was kept six feet away.

But one of the rules for poll watchers released by the Pennslyania Secretary of State before the election states: “Poll watchers must maintain social distancing practices and ensure they are at least 6 feet from others at all times.” That would presumably include people counting ballots.

Giuliani said when Borat Subsequent Moviefilm was released Oct. 22: “The Borat video is a complete fabrication. I was tucking in my shirt after taking off the recording equipment. At no time before, during, or after the interview was I ever inappropriate. If Sacha Baron Cohen implies otherwise he is a stone-cold liar.

On Tuesday, Giuliani shrugged off the bad news about his first witness.

“There are over 50 witnesses,” he told the Daily News. “There are so many others.”

Here is the Rudy Giuliani news conference that featured Daryl Brooks in its entirety.

Silence of the Lambs House Where Buffalo Bill Lived Sells After Receiving 6 Offers
Own Your IP: How Codie Elaine and Tommy Oliver Made Black Love, and Kept 100 Percent Ownership