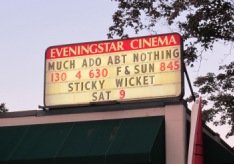 https://moviemaker.com/trailblazer-tuesday-crowdfunder-of-the-week-eveningstar-cinema/"> by Haven Goldstein and Alexandra Eide
&BODY=I found this article interesting and thought of sharing it with you. Check it out: https://moviemaker.com/trailblazer-tuesday-crowdfunder-of-the-week-eveningstar-cinema/">

This week MovieMaker is mixing things up with a theater project from Seed&Spark. Instead of spotlighting a film, we’re shifting our attention to a venue – an old theater in need of a little “TLC:” Eveningstar Cinema.

Although films may be the shining stars, brick-and-mortar theaters remain the hearts and souls of the movie industry. In the increasingly digitized landscape we watch movies in these days (see yesterday’s VOD Distribution Guide for that conversation), four-walled, physical theaters seem more and more a luxury – it’s easy to forget, sometimes, the entire past century ruled by theaters both plush and palatial, and endearing grimy. At MovieMaker we don’t just care about films – we care about the institutions that give them meaning. And Eveningstar Cinema is setting out to do just that.

With movie theaters chains overwhelming most of the nation, Eveningstar’s uniqueness feels refreshingly charming. Even its name is mystical: founder and owner Barry Norman told MovieMaker that the cinema was named after a “Native American story, that revolved around a princess named Evening Star.” Established in 1979 in Brunswick, Maine, the theater was converted from an old automotive garage into the quaint 100-person venue it is today. Yet Eveningstar Cinema now finds itself at a critical impasse: either it modernizes, or it closes its doors forever. As much as Norman would like to hold fast to its classic projection system, movie distributors are forcing it to trade in traditional for digital. This means big money, but Norman lacks deep enough pockets to make the change.

Norman aims, too, to expand Eveningstar’s space. With a larger venue, including a restaurant/brewery and more screens, Eveningstar will have the opportunity to showcase more independent films and perhaps even host its very own film festival. As founder of the Rome International Film Festival, Norman is no stranger to the festival circuit. He hopes to make Eveningstar another destination for filmmaking talent.

We at MovieMaker think it’s a great goal, and we wish we were on the East Coast to take advantage of some of those donor benefits! Because what’s better than spending a Friday night at the movies with a beer in hand?

Synopsis: Raising money to pay for a digital projector system, as well as acquiring a local church with the intention of converting it into a two-screen theater with a restaurant/brewery.

Funding Goes Toward: To pay for a digital projector system, including projector, software, screen and digital processor and installation. This campaign is running on Seed&Spark, a platform that allows donors to choose the specific area their funds will go into, which may be more satisfying than donating into a vacuum.

$25: A small popcorn and beverage once a month for one year, as well as a handwritten thank you note and web recognition.

$50: One backer T-shirt, two free drinks, a free large popcorn and one second of 35mm film from a trailer.

$250: You get a personal seat with your name on a plaque attached to it!

$10,000: You get to pick your favorite movie to play for one week at Eveningstar Cinema! (Barry Norman would show a Kubrick film!)

Moviemakers, keep them coming! We welcome any crowdfunder campaign submissions for spotlighting consideration in our Trailblazer Tuesday series. Email info@moviemaker.com with your pitch! Help us to help you get your films made.