Our department at Sundance Institute has been undergoing some changes. Actually, it always seems to be evolving. Since its creation in 2011, we’ve been moving at a pace that’s competing to keep up with the ever-evolving landscape of film marketing and distribution. Right now, one of the major things we’re interested in is transparency.

We regularly write educational pieces trying to pull back the curtain on the process of marketing and distribution; we’re also preparing our first major case studies on our first two fellowship films — Unrest and Columbus — in the springtime.

The Creative Distribution fellowship is an immersive, rigorous program for entrepreneurial producers and directors seeking new ways to build and reach audiences with their finished work. We are now accepting applications for films preparing for a 2018 or early 2019 release that are open to a creative release — i.e. without a traditional distributor. For all details, please check out this link.

A major facet (and requirement) of this fellowship is total transparency between the accepted fellowship films (and their teams) and so, we thought, how can we facilitate their transparency and not engage in some ourselves? We want to openly talk about the application process for our fellowship, the motifs we’re noticing, and present some takeaways that could help inform your own process for grants, fellowships and festival submissions.

A caveat we want to mention is that a lot of the demographics are probably directly related to the outreach efforts we’ve participated in. Our outreach efforts include major podcasts (Indie Film Hustle, The Noam Kroll Show, Making Movies Is Hard, Just Shoot It), major festivals (50+), other film nonprofits (including Film Independent, Austin Film Society, IFP, Nashville Filmmakers Guild, Center for Asian American Media, FilmNorth) and more. We also did a lot of promotion within Sundance Institute’s email lists, as well as in each of the public press pieces we write (Moviemaker Self Distribution Guide, Creative Distribution Editorial). We recognize that the demographics and trends in the submissions could have been affected by the types of outreach we have done and wanted to acknowledge that outright.

All right! Let’s start with the types of films that are submitting to our fellowship. First of all, we’ve received 102 submissions so far since our opening in early October 2017.

Of the 21 films we’ve screened so far, here is a breakdown of their durations:

Anecdotally, we did have to field a lot of questions from people whose films did not meet the 70-minute length requirement. We have interpreted that as a byproduct of the advancement and popularity of new mediums (episodic, VR) and the idea of the traditional feature length ebbing.

In terms of the types of films we’re receiving:

The gender and age breakdowns of applicants are as follows:

In terms of the budgets of submitted films, here is a breakdown: 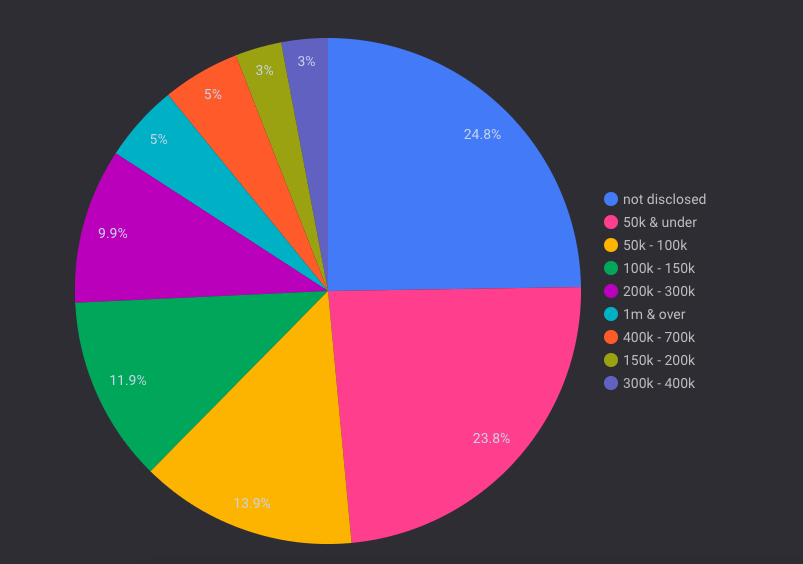 Though we are working on revisions to our means of data gathering and representation of race/ethnicity, we do want to share the backgrounds of those applying for our fellowship:

We want to end our piece with some important takeaways to impart that could be helpful to you as you submit to various festivals, grants or fellowships.

When we look at each application, we heavily weight your trailer. Do we want to see this film? Does it look polished? If the trailer is unprofessional, we’re going to assume the final product of the film is as well. If any of the technical elements fail in that trailer (especially sound), we’re going to assume that the final film will have unfinished technical elements that will be distracting. Make sure your trailer is as perfect as it can be. We encourage you to cut a trailer that conveys the story of your film (or all elements you want to impart) without any external context. Have the trailer reflect the tone of your work. Test it! Test it with your friends, your network and with strangers. Ask them what works and what doesn’t.

2) Know When You Apply to Something (At Least For Us), It Will Be Viewed

When pitching the fellowship around, we got a lot of comments from filmmakers about how they didn’t think their application would be viewed. In fact, they’d take more of a fatalist approach and claim “why apply, I’ll just get rejected anyway…” Here’s why. We have looked and read every single application. Please take time and care with your application because if you manage to connect with someone reading it, they will go to bat for you.

3) Your Film is Less Unique Than You Think

We’re seeing trends in some films. Whether it be genre, concept or tone — your film may be less unique than you think. You can’t change your film, so, what better reason than to make sure you stand out from the pack in ways you can control now. Complete your application thoroughly, and make sure the tone of the application reflects the passion you had in making the film.

4) Acceptance/Rejection is Never a Reflection of Objective Quality

A lot of wonderful films have applied for our fellowship and unfortunately received a “pass” email from us. There are a lot of reasons why these films did not advance. You can not control the way your film is received, but you can put yourself on the best possible footing. Know that your application is always being looked at in context. Perhaps Sundance Institute has already funded a project like yours. Perhaps we’re focusing on documentary selections and not fiction in that moment. It’s very hard but try your best to take the rejection and channel that energy into finding your audience. MM

Don’t Wait for a Deal to Float Your Way. Self-Distribution Can Be Plan A For Your Feature
A Recipe For Distribution: Five Ingredients of a New Formula For Your Indie’s Release Strategy