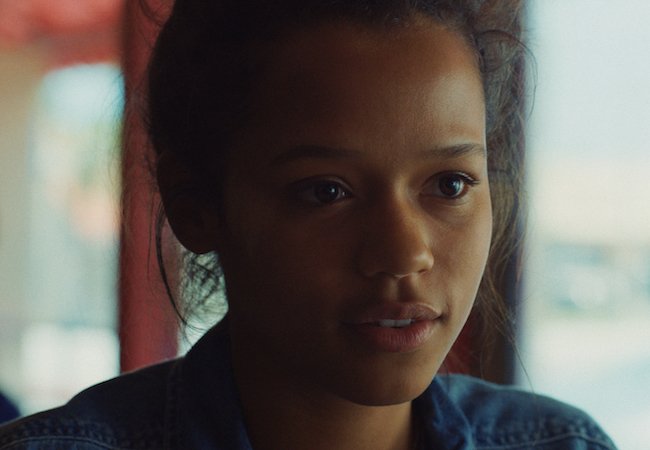 “I know I have a baby face and I’m OK with that,” Russell tells MovieMaker. “I trust the timing of things.” Rather than feeling pigeonholed, she appreciates that she continues to have the opportunity to portray teenagers positively and “with a full humanity to them.”

Perhaps the most amazing thing about Russell’s performance is that she ends up stealing and owning the movie, despite sharing the screen with two of the most lauded young actors of their generation in Hedges and Harrison Jr. (both of whom Russell describes as “beautifully sensitive young men, in touch with their emotions”).

Russell and Harrison Jr.’s characters are high school students living in an upper-middle-class area of Miami with their parents (played by Sterling K. Brown and Renée Elise Goldsberry). As Harrison’s character, a star athlete, navigates a volatile relationship with his girlfriend, Russell’s more introspective character begins a relationship with a slightly awkward young man played by Lucas Hedges.

But Waves—which is truly a film of two halves—only devotes part of its runtime to its broken families theme.

Also Read: Edward Norton Walks Us Through Every Part of Making Motherless Brooklyn

For the first half, Russell is largely in the background. But at the film’s halfway point, she completely takes over. Despite this dramatic midway shift in focus and tonality in the finished film, Russell says the shooting order was all over the place.

Depending on the day, Russell was constantly switching between scenes where she was the focus and scenes where she was in the background. But she and her co-stars grew very close during the 30-day shoot, and they were there to support each other while filming the most intense sequences.

Attending Telluride Film Festival in September marked the first time Russell accompanied a film in which she starred at a festival in her career. Waves‘ world premiere, Russell says, proved to be perfect for launching both the film and herself into the public consciousness: “Everyone at Telluride is a big movie geek, and they just want to discuss what they’ve seen,” she says.

More in Inside MM - Acting